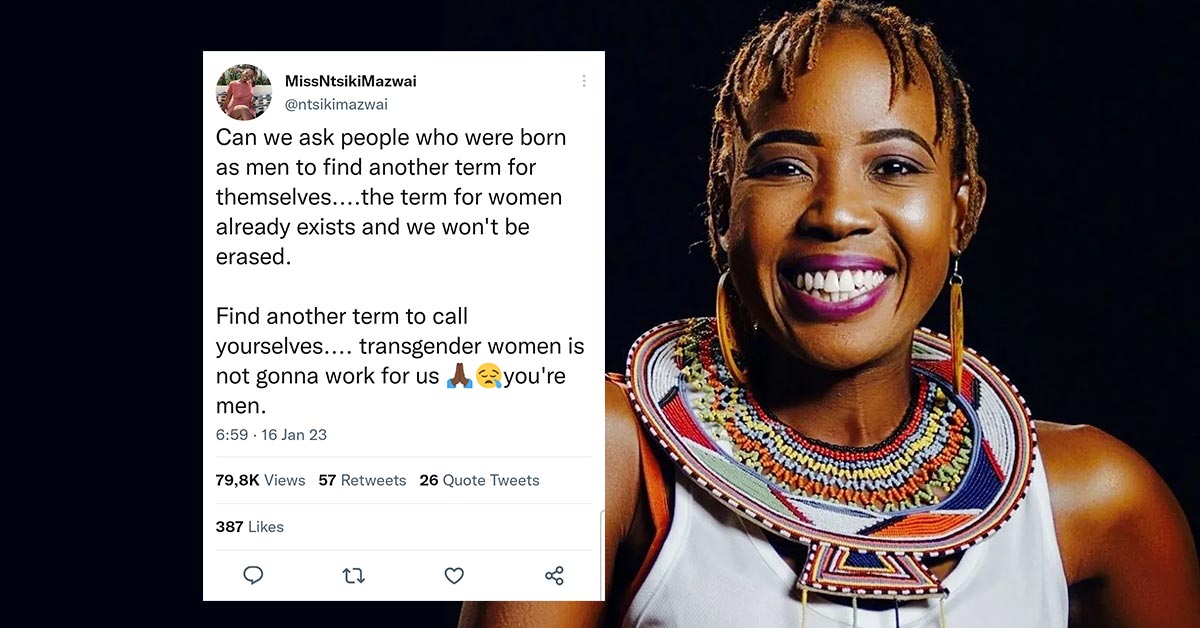 South African poet, artist and social media commentator Ntsiki Mazwai is again targeting the LGBTIQ+ community, this time denying that transgender women are women at all.

On 16 January, the controversy-hungry Mazwai posted a tweet described as “problematic and hurtful” in which she repeated the harmful and unfounded view that women’s rights are threatened by trans rights.

“Can we ask people who were born as men to find another term for themselves….the term for women already exists and we won’t be erased,” she wrote to her more than 370,000 followers.

“Find another term to call yourselves…. transgender women is not gonna work for us… you’re men,” Mazwai added flippantly.

She later restated: “It’s true… I don’t [see trans women as women]… I see them as men who have transitioned…”

Mazwai went on to fiercely and repeatedly defend her views, writing, for example: “Men are so fucken toxic…. how they change themselves to women and want to be the owners of feminity… this is all just a variation of men oppressing women….nothing more. It’s sick.”

In August last year, Mazwai came under fire for another queerphobic tweet that sparked a wave of homophobia and transphobia on Twitter. In that post, she bizarrely claimed that gay men are “trying to erase” women.

She justified her stance at the time by telling Mamba that she saw her tweet as an “opportunity to engage and teach” and that she simply aimed to spark “difficult conversations”.

Her latest statements have once again fueled other queerphobic social media users to vent their bigotry in the many comments on her tweets.

In a joint statement, trans and queer groups S.H.E, Gender DynamiX, and Iranti condemned Mazwai’s post and called on her to delete it.

“Despite societal perceptions and attitudes that force transgender women to exist at the margins of society, transgender women are women and we have always been part of African cultures and history and therefore our existence will never be erased,” said the organisations.

Too often, these utterings lead to systemic violence perpetuated in healthcare and access to justice.”

“Claiming that gender is determined only by narrow physical/biological factors is misinformed and bio-essentialist. It ignores decades of scientific research that shows that gender, like all human characteristics, is a spectrum, not a binary, and is composed of complex social and biological factors,” they continued.

“By leaning into gender essentialism, Mazwai promotes and supports the very same patriarchal and misogynistic gender stereotypes she claims to stand against, sentiments which are damaging and harmful to ALL women. True feminists do not wish to limit any woman’s identity or freedom to fully be herself.”

Mahloko noted that not only did Mazwai “impose violence on the trans community, but her post also sparked a spate of transphobic violence in the comment section of the post.” They added that “At no point in my life have I ever benefitted from male privilege, in fact, I have been ostracised and denied because of my diverse gender expression.”

The three organisations argued that Mazwai’s views “are the basis of the systematic stigma and discrimination geared towards the trans community and undo decades of work done by women, and the entire South African queer movement, geared at creating a nation where ALL women are respected and can express themselves safely, and freely.”

At the time of writing this article, Mazwai’s initial post had been viewed more than 80,000 times. While she continued to vigorously back up her stance in numerous follow-up tweets and videos, she eventually deleted the original tweet on Tuesday.

“Guys I have deleted the offending tweet …..because when someone says something you have put up, hurts their feelings…..the right thing to do, is to take it down,” she wrote.

Mazwai’s deletion and statement are disingenuous; her many other subsequent offensive tweets and videos supporting her transphobic position and the hateful comments from her followers that she retweeted remain on her timeline.