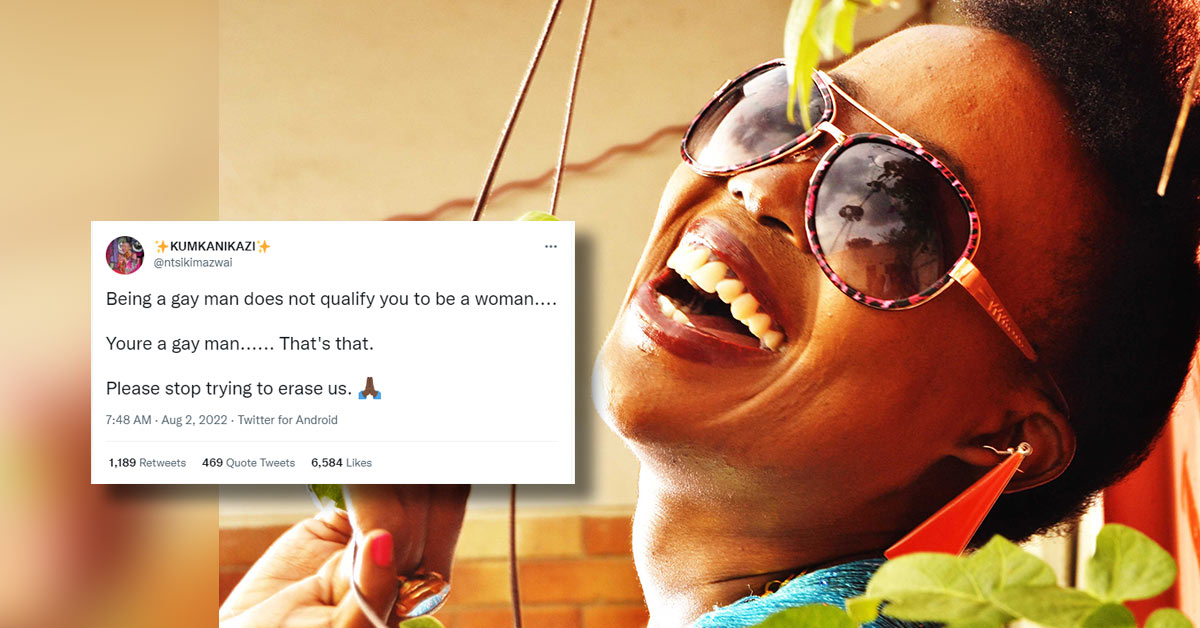 South African poet, artist and activist Ntsiki Mazwai claims she was just starting “difficult conversations” after sparking a wave of homophobia and transphobia on social media.

On Tuesday, Mazwai tweeted to her more than 360,000 followers: “Being a gay man does not qualify you to be a woman…. Youre a gay man…… That’s that. Please stop trying to erase us.”

The cryptic post quickly went viral on Twitter with more than 1,600 retweets and 6,500 likes at the time of publishing this article.

Members of the queer community and their allies reacted to the statement by pointing out to Mazwai – who also describes herself as a “healer and table shaker” – that being gay is about sexual and romantic attraction, not gender identity. They were also puzzled by her assertion that gay men are trying to “erase” women.

Inevitably, the post generated dozens of homophobic and transphobic comments in support of Mazwai’s views, with some applauding the poet for being “brave” enough to echo their own sentiments.

“I’ve always felt like this but I’m scared to say because I didn’t want to sound homophobic or disrespectful of the LGBTQ+ community. But I don’t feel comfortable with those gays who act like women, like NO,” said one person.

Many blindly repeated the narrative that gay men are trying to be or “impersonate” women and also continued to equate homosexuality to being transgender. Their comments typically asserted that gender is binary and immutable and rejected the validity of transgender realities and identities.

“Y are they wearing dresses if they nt trying to erase women…u even imitate hw they walk,” asked one individual. “Apparently these days you can just put on a skirt, change the tone of voice and wear then boom you’re a full on woman,” said another commentator.

Other statements included: “I’ve always wondered why women tolerate the alphabet community appropriating womanhood, but scared to ask, lest I be accused of the h-word” and “I feel you Sis they need to be stopped at all cost.”

Despite the vile homophobia and transphobia emanating from her post, Mazwai hunkered down on her own queerphobic views and continued to target the LGBTQ community.

She went on to post comments like: “The word woman comes from WOMB man… A person who carries a womb”, “If one can simply change their identity then it means white people can also identify as black”, “Gay men competing with women is part of toxic masculinity,” and “The main problem with the lgbqti community is their inability to call out their own bullshit.”

When MambaOnline contacted Mazwai for comment about the firestorm on social media, she insisted “with love and humility” that her intention was not to be offensive and inappropriate, and instead described her posts and statements as an “opportunity to engage and teach”.

She argued that “there are toxic things and behaviors that happen in the queer community that never get called out for the fear of being called homophobic,” and asserted that “yes I have experienced gay men being competitive with the alpha female.”

When we asked her to clarify in what way she believes that gay men are competing with women, Mazwai, who is the younger sister of queer vocalist, musician, and songwriter Thandiswa Mazwai, did not reply.

Firstly I would like to express that I will and have always been a character who open the can of worms. I’m always in uncomfortable corners and most definitely always ready and willing to learn.

The queer community is a vast range of people and it is not one thing. Yes, sexual orientation is just that…. Orientation. This is a nuanced subject that cannot be abused in Twitter generalizations. I understand that there are time my tweets come across as offensive and inappropriate, that is never my intention.

I feel like there are toxic things and behaviors that happen in the queer community that never get called out for the fear of being called homophobic. I think that this is a huge conversation that requires national discourse beyond calling me to order. I feel that there is opportunity to engage and teach.

Yes I saw some of the comments and they are definitely not what I signed up for, but on Twitter it is always like that. A tweet can open so many doors. I don’t like the door of homophobia and hate that my tweet opened, it was not the intention……

So back to my original tweet…… Yes I have experienced gay men being competitive with the alpha female.

With love light and humility

Being a gay man does not qualify you to be a woman….

Youre a gay man…… That’s that.

Please stop trying to erase us. 🙏🏿