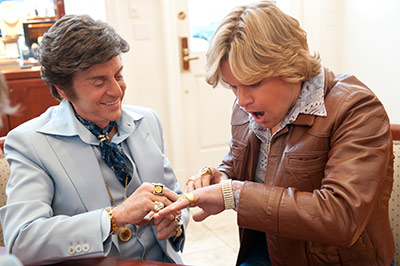 Michael Douglas and Matt Damon gleefully throw their heterosexuality to the wind as they take on the roles of showbiz lovers in the memorable Behind the Candelabra.

The film is not so much about the life of the legendary high priest of piano camp Liberace (Douglas) as it is about the dysfunctional five year relationship between the star and his younger lover Scott Thorson (Damon).

It’s based on the tell-all book by the same name written by Thorson after Liberace’s death and is directed by the acclaimed Oscar winning Steven Soderbergh (Sex, Lies, and Videotape, Erin Brockovich, Traffic, Ocean’s Eleven and Magic Mike).

Candelabra gives us insight into old-style Hollywood celebrity in the form of Liberace, a preening stage performer (the highest paid entertainer of the time) whose campness was rarely seen as a sign of his homosexuality among his hordes of naive female fans.

Liberace appeared to live a happily closeted life, with no desire to be open about his sexuality during his career, which spanned the 40s, 50s, 60s, 70s and 80s. In fact, he denied being gay till the day he died and even won lawsuits against publications that dared suggest he fancied men.

The thought that a raging queen could be a star of his magnitude didn’t seem to occur to Middle America in those days. After all, homosexuals were seen as predators lurking in sordid underground nightclubs, not appearing on television screens and Las Vegas stages.

In some ways things haven’t changed that much. It’s an indictment of Hollywood’s corporate homophobia that despite its A-list cast and acclaimed director, no movie studio was willing to touch the project, forcing Soderbergh to take it the HBO television network to finally get it made.

That means that while the film gets screened in cinemas around the world, it was only broadcast on pay-television in the US. It’s clear however, that Candelabra has no intention of being a typical made-for-TV movie.

It’s certainly one of the best films to come out of the US this year, with few signs of its television roots. Candelabra is beautifully crafted; from its production to the integrity of its stars’ performances.

Liberace and Scott’s relationship had many of the pitfalls of a wealthier, older man taking a younger attractive man with few prospects under his wing (and bed sheets). They faced additional pressures thanks to the excesses of the showbiz lifestyle; drugs, distorting adoration and way too much money.

It’s easy for a film like this to become caught up in clichés about gay life, the lurid details of celebrity extremes and the camp spectacle of Liberace himself, but that never becomes the case. 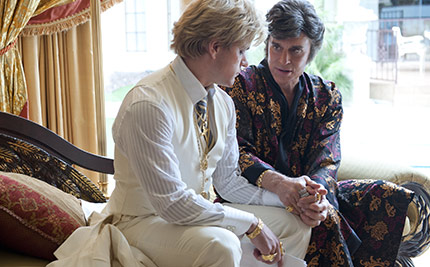 While Candelabra is indeed funny and entertaining, Douglas and Damon bring integrity, truth and an emotional punch to their characters’ relationship. Through all the madness we believe that these men cared deeply for each other.

The two leads unreservedly throw themselves into their roles – body and soul. (Damon repeatedly and unashamedly displays his honed physique; as appropriate for any toy-boy worth his salt.)

There’s much that gay men are likely to connect with in this film; little nuggets of gay experience that ring true and that add a real and gritty edge to the film’s bling veneer. It’s something that’s rare in a gay themed film starring heterosexual Hollywood leading men like Douglas and Damon. I’d wager that many heterosexual members of the audience are likely to miss a few subtleties here and there that strike a chord among gay viewers.

Needless to say, had Behind the Candelabra been shown in American cinemas it would have been in the running for a couple of Oscar nominations, especially for Douglas’ performance as the petulant, self-absorbed yet immensely likable Liberace. Unsurprisingly, it recently won three Emmys; best miniseries/TV movie, best actor for Douglas and best director for Soderbergh.

In South Africa we’re lucky to get to see Behind the Candelabra on the big screen. It’s an opportunity not to be wasted.