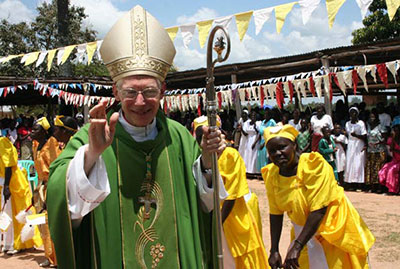 While the Pope’s representative to Uganda says he’s opposed to the recently passed Anti-Homosexuality Bill, a bishop in Spain has attacked same-sex marriage.

According to New Ways Ministry, Archbishop Michael Blume, the papal nuncio (representative) to Uganda, has written that he hopes that Ugandan President Yoweri Museveni does not sign the bill into law.

Blume made the comment in a response to a December 21st e-mail from Divine Word Missionaries Brother Brian McLauchlin asking for his support in opposing the bill, which was passed by MPs apparently without official government backing.

“Although the Catholic Hierarchy may not approve of same-sex relationships or a homosexual lifestyle, I believe the Hierarchy would agree that everyone has the right to be treated with dignity and respect,” said McLauchlin. “Imprisoning someone for life would clearly constitute an abuse of his/her rights.”

Blume replied on the same day, stating that the passage of the bill “caught many of us, including the bishops’ conference, by surprise”.

He referred McLauchlin to an earlier statement on the bill by Ugandan catholic bishops in which they asserted that the proposed law “does not pass a test of a Christian caring” and that the “targeting of the sinner, not the sin, is the core flaw” of the bill.

Blume added that “the bill will die if the President does not sign it within thirty days. We pray the Holy Spirit to give him wisdom.”

It remain unclear if President Museveni intends to sign the bill and if parliament has the power or support to make the bill law without his backing.

Meanwhile, in Spain, Bishop Casimiro López Llorente slammed same-sex marriage in his final letter of the year, titled “The good news of marriage and the family.”

In it, he stated that Spain’s legalising gay marriage in 2005 has “laid the foundation for the destruction of marriage and the family,” reported ABC.

Bizarrely, and with no evidence to support this, he went on to say that these unions have led to a “significant increase in children with severe disturbances of personality and the development of a climate that often ends in violence”.

While Pope Benedict has displayed a more accepting approach, the church remains opposed to same-sex marriage and officially condemns gay sex as “acts of grave depravity,” describing them as “intrinsically disordered” and “contrary to the natural law”.