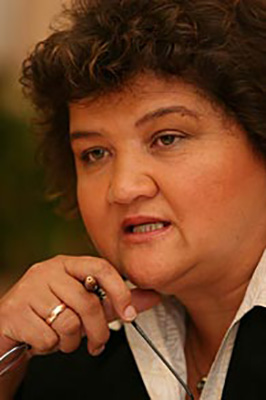 President Zuma, widely perceived as being something of a homophobe, has appointed a lesbian woman as a minister to his Cabinet.

On Tuesday, Lynne Brown, 52, was sworn in by Chief Justice Mogoeng Mogoeng as the new Minister of Public Enterprises, replacing Malusi Gigaba.

She is the first openly lesbian or gay cabinet minister in South Africa’s history and also the first on the continent.

Brown, a member of the ANC, is not known to be vocal about her sexual orientation or LGBT rights but has a certificate in Gender Development Planning Methodology from University College in London.

Not much is known about her personal life, but Brown is said to have an interest in golf, reading and arts and culture.

Steven Friedman, the director of the Centre for the Study of Democracy, told The Guardian: “She’s not a gay rights campaigner – it’s not recognition in that sense – but the fact that under the most socially conservative president since 1994 there is the first openly gay minister in such a position is significant.”

The move could well be noted by increasingly homophobic African governments, such as Nigeria and Uganda.

Also speaking to the Guardian, gay political commentator and author Eusebius McKaiser said Brown’s sexual orientation is newsworthy, “insofar as the social impact of openly gay people in high-profile public leadership positions cannot be discounted in a country like South Africa where levels of homophobia, including violence against black lesbian women, remain rife.”