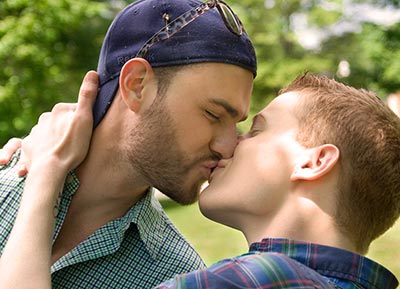 Six gay rights activists in Italy are being prosecuted for kissing during a demonstration in March.

The activists were informed by the city of Perugia’s public prosecutor’s office earlier this month that they have been accused of “disturbing the peace.”

According to Human Rights Watch, the three men and three women were charged after they held a spontaneous and uncoordinated public counter-protest against the anti-gay-marriage group Sentinelle in Piedi (Standing Sentries).

“The charges would be laughable if they didn’t reflect exactly the anti-gay sentiment the activists are fighting against,” said Judith Sunderland, senior Western Europe researcher at Human Rights Watch. “The public prosecutor should withdraw these charges immediately.”

The public prosecutor acted on the basis of a police report that accused two of the men of engaging in “a long and passionate kiss on the mouth … in front of many families with children and adolescents many of whom are minors, leaving passersby disgusted by such a demonstration.”

The activists are members of local LGBT rights groups Omphalos and Bella Queer. All six are accused of disturbing the peace, while four are also accused of holding an unlawful demonstration.

“Gay men and lesbian women kissing in public is not a crime,” Sunderland said. “The activists’ actions are clearly protected by their right to peaceful protest.”

These protests are taking place in the midst of growing tension over same-sex marriage and civil unions in Italy. The predominantly Catholic country is one of the few European nations to not offer some recognition of same-sex relationship.

Several progressive Italian cities, including Milan and Rome, have begun registering same-sex marriages contracted abroad in the face of opposition from the government.

There are also efforts under-way to legalise civil unions for same-sex couples, but full marriage equality is unlikely in the foreseeable future, thanks to the powerful influence of the Catholic Church.