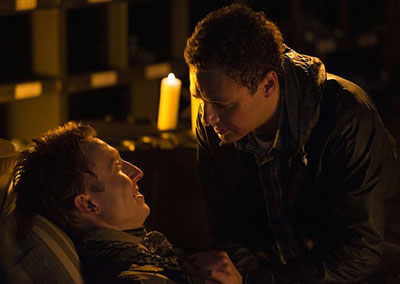 It’s not the zombie apocalypse survival show’s often gruesome violence that has viewers up in arms, it’s a brief loving kiss between two men that took them over the edge.

In the latest episode broadcast in the US, Aaron (Ross Marquand), The Walking Dead’s first male character who was introduced last week, is shown discovering that his boyfriend, Eric (Jordan Woods-Robinson), is still alive.

Their happy reunion is sealed with a shadowy kiss, which was simply too much for some fans to bear. They took to social media to unleash a wave of raw homophobia.

Nic Hobbs (@slicknichobbs) wrote, “Not sure if I was hungry just now or if I was sick from that gay kiss? #WalkingDead,” while JakeDaum32 (@not Jake Daum) exclaimed, “Really walking dead? The one show that doesn’t have faggots on it and you gotta bring two of them in. Really disappointed.”

Many said that they’d stop watching the series because of the smooch. Proudly gun-toting 51-year-old “Hot Lead retired” posted two YouTube videos voicing his upset at the same-sex kiss, which he called the “The Walking Dead Kiss of Death.”

“I used to be a fan of the episode till last night’s episode,” he said, adding that he would now boycott the show because “it just ruined the whole thing for me.” He urged the producers to shoot a scene in which a “zombie dressed as a priest attacks the two gay guys while they’re doing a love scene and bites them both and turns them into zombies. And get Daryl to put a couple of crossbow arrows through their heads. And then I might come back and watch it.”

Keifer (Lirette @KeiferLirette) also pointed out that The Walking Dead viewers are okay with gory murder, cannibalism and child killing, but “things they aren’t okay with: Gay people.”

Fans of the original The Walking Dead comic series on which the television show is based would have already known about the gay characters, who were featured in the comics.