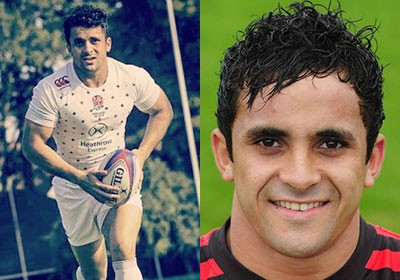 The rugby closet is slowly opening in the UK as Sam Stanley becomes the first English professional union player to tell the world that he’s gay.

The 23-year-old England Sevens player, who has a penchant for singing and playing the guitar, came out in an interview with the UK’s The Sunday Times over the weekend.

“I was 10 or 11 when I realised I was different to my friends,” said Stanley. “I didn’t want to accept it, I felt that being different wasn’t right. I had a girlfriend and I was thinking that, like some people say, maybe it is just a phase.”

The athlete, who’s from English and Samoan descent, also revealed that he has been in a relationship with his partner Laurence for five years.

Stanley said he feared that being openly gay would ruin his rugby career. “You are so worried about what people will think and I thought I couldn’t be a macho rugby player the way I was, and there was nothing else I wanted to do with my life.”

He even considered ending it all. “I was standing on a bridge about four or five years ago, overlooking a motorway in Essex. However, looking back, the idea that I would jump was ridiculous but it was as if I was thinking that I could get rid of the pain in one go,” Stanley explained.

Happily, his coming out has reportedly been well received by friends, family and his teammates.

Stanley represented England internationally five times. He is currently signed with Ealing Trailfinders but is recovering from a serious knee injury. He comes from a stellar rugby family; he’s the nephew of former All Blacks player Joe Stanley and his brother Mike is in the Samoan World Cup squad.

Stanley follows in the footsteps of Keegan Hirst, who earlier this month became the first British professional Rugby League player to come out, and Welsh former British Lions Captain Gareth Thomas who came out in 2009.

He’s not only a killer on the sportsfield, but Stanley also sings and plays the guitar. Watch him perform in the buff below.