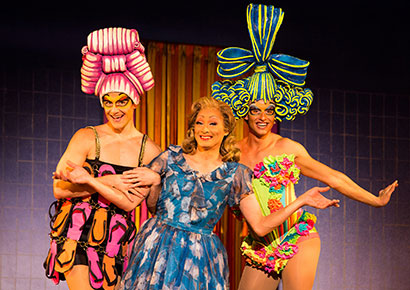 Wow! And I mean it – what a show. The breathtaking costumes, the uplifting music, the talented cast and, of course, the bus!

It’s about time that we have the best of the best. So often the international shows that we see here are never quite as good as the non-touring versions and I feel let down and ripped off.

But I’ve seen Priscilla Queen of the Desert three or four times abroad and at last the people of South Africa get to see the ‘real show’.

I loved every second of the Priscilla experience, now on at Montecasino in Johannesburg; from the minute I stepped up to the bar to the moment I left the theatre singing the hits. (I’m still singing Colour my World as I write this!)

The show could easily be called a bit of a ‘Barnyard Theatre production” in that it follows the recent fad of making up musicals around existing popular songs instead of having its own original music. 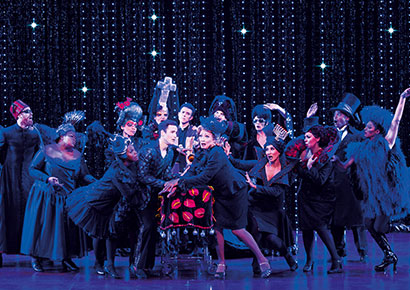 Thanks to its gay themes, however, Priscilla is much more than that. In fact it’s unlikely we’ve ever seen a mainstream musical theatre production that is so proudly and overtly LGBT – tackling issues of stigma, homophobia, transphobia (often within the community itself) and gay parenting.

What also helps it stand out is that it remains true to its Australian roots, from the (usually excellently maintained) accents to the uniquely Aussie humour.

Priscilla tells the story of a gay father and two friends who set out to meet his son who lives with his mother across the country. And so, a trio of drag queens go on a road trip of a lifetime on a very special bus, called Priscilla.

They bring a bit of camp to every location along the way, pushing boundaries in the deepest parts of the Outback, with hilarious and sometimes unexpected consequences. The hugely entertaining show is also sprinkled with just the right amount of genuine emotion.

The show suffered from a few opening night problems, all of them technical. Thanks to a truly amazing proudly South African cast, most of the audience never noticed. 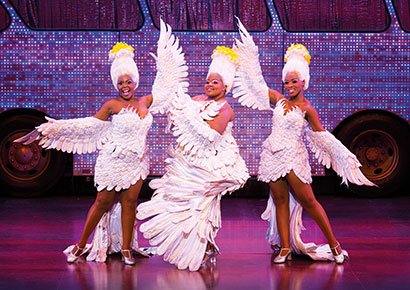 The three principal leads – David Dennis, Daniel Buys and Phillip Schnetler – really impressed, as did the large supporting cast. A standout for me was dancer Henk Opperman (he’s easy to spot with the bleached blonde hair).

I asked a good friend of mine who played the role of Felicia in London’s original West End production, what he thought was the hardest part of the show.

His reply: “Wearing those crazy heels! And not just for the show but for the eight hour per day and three weeks of rehearsals.”

So, I have two words for you: Corn plasters!

If you have seen the movie you will not be disappointed with the show. If you haven’t, Priscilla Queen of the Desert the Musical will change your life for the better.

Priscilla Queen of the Desert is on at the Teatro at Montecasino in Johannesburg until 18 June 2017.