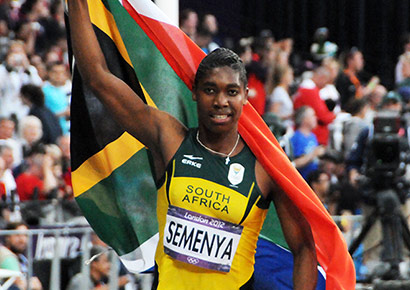 South African LGBTQ Olympian and sports icon Caster Semenya will formally challenge an attempt by international athletics bosses to force her to change her testosterone levels.

On Monday, Semenya filed a case with the Court of Arbitration for Sport (CAS) in Switzerland against controversial new International Association of Athletics Federations (IAAF) regulations concerning women athletes with high testosterone levels.

The rules, announced in April and set to come into force in November, would force the 27-year-old track star to use medication to artificially lower her natural testosterone levels in order to be allowed to compete as a woman.

Critics of the IAAF regulations argue that the basis of what is defined as a “normal” testosterone level is arbitrary and discriminatory. They also claim that the rules appear to specifically target Semenya and other women of colour from the global south.

“Ms Semenya, like all athletes, is entitled to compete the way she was born without being obliged to alter her body by any medical means,” said the runner’s law-firm, Norton Rose Fulbright, in a statement.

Semenya believes that the rules are a violation of her human rights and “discriminatory, irrational, unjustifiable” and that she is simply competing with her natural-born talents.

“I am very upset that I have been pushed into the public spotlight again,” said Semenya. “I don’t like talking about this new rule. I just want to run naturally, the way I was born. It is not fair that I am told I must change. It is not fair that people question who I am.”

She added defiantly: “I am Mokgadi Caster Semenya. I am a woman and I am fast.”

Semenya is a three-time 800m world champion and won silver at the 2012 Summer Olympics and gold at the 800 metre event at the 2016 Summer Olympics. In January last year, she followed her 2015 traditional marriage ceremony to longtime partner and wife Violet Raseboya with a ‘white wedding’ that made global headlines.