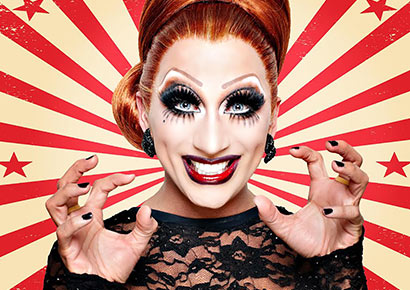 International drag superstar, Bianca Del Rio, was recently in South Africa for her Blame it on Bianca Del Rio comedy tour. Mambaonline had a short but uncensored Q&A session with the season six winner of RuPaul’s Drag Race to chat about all things drag and her international success.

Q: You’re finally in South Africa, how are you finding the country so far?

B: Well it’s absolutely beautiful. I am excited to get out of America just because, you know… My hotel is lovely, and I’ve done a bit of shopping. I’m hoping to come back again, to spend some more time here. I mean the scheduling has been very tight but hopefully soon I can return and have a nice holiday.

Del Rio made a name for herself with her raucous, hilarious, no-holds-barred commentary on the everyday annoyances of the world. She describes herself as a hateful and mean “clown in a gown”.

Q: Drag has always been an important form of expression for the LGBTQ community, but what do you think about the way that it’s become almost mainstream?

B: I think it’s an amazing outlet, number one. I mean I’ve been a drag now for 23 years and so to continue to do it has been amazing. But also just to see the changes, truthfully over the years, I did not expect or anticipate this global impact it has now and the fact that it’s on television and in people’s living rooms. I think that’s amazing. It is great to see how it has grown. But I think with everything, there is good and bad. The greatness is that drag is celebrated but now with social media, in particular, you have a lot of people that have negative comments and feel that their opinions are warranted or needed, and I find that to be the sad part about it. There is no right or wrong when it comes to drag. You can do whatever you want and dress yourself however you choose. So that’s why I think it’s great, especially for the LGBT community. I mean we’re also the most welcoming group there is.

Once known as Cuban Honduran entertainer Roy Haylock from New Orleans, the 43-year-old Bianca is also a costume designer and stage actor.

Q: How do you overcome the negativity from the naysayers and trolls about drag culture?

B: Oh I don’t give a shit (laughs). I personally don’t care, because they’re never going to say it to your face. I see it as just their opinions, and you can have an opinion and I can also have an opinion. But also, I know, deep down that I could easily have a Twitter war, but why waste my time by saying something hateful? Because I know they’re gonna die! (laughs) Waste your time writing something hateful about me, I don’t give a shit. I don’t give a fuck, I don’t care. It’s someone’s opinion and I don’t really care.

Del Rio is considered an all-time favourite by many RuPaul’s Drag Race fans. She was the first to make it through the entire competition without ever placing low or in the bottom of a challenge and was also the first Hispanic winner.

Q: You gained international prominence after winning RuPaul’s Drag Race in 2014. Do you think that platforms like the show are still important and necessary?

B: Yes, of course. I mean we live in world now where someone like Kim Kardashian can have a sex tape and she’s now a millionaire. Truly, I wouldn’t have the longevity that I have without Rupaul’s Drag Race, but I think the years leading up to it were practice for the great opportunity. Now they’re on season 10 and I’m from season 6, so it is quite amazing to see how many queens have come out of that. I mean even if you weren’t a winner, several of the queens who weren’t winners are still extremely successful. So I think it is amazing and it has definitely changed drag culture.

RuPaul recently made headlines after he said that transgender contestants who’d transitioned should not take part on his Drag Race show. Following an outcry, he was forced to issue an apology, stating that, “the trans community are heroes of our shared LGBTQ movement”. 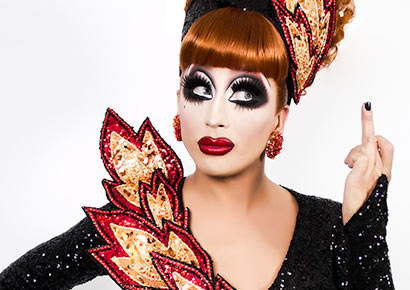 Q: Do you think other genders can also take part in doing drag?

B: Of course! I think anybody can do whatever they want. If putting on a wig makes you happy, then do it! Who am I to say you can’t do that? I think it’s silly for anyone to limit people in what they can do and telling them what they can’t do. Do whatever the fuck is going to make you happy. Unless if you’re a Catholic priest, then no, leave the children alone. But overall, I think you should do whatever you want to do.

Q: South Africa is said to be a haven for Africa’s LGBT community. However, there are still members of our community who are subjected to harsh realities. What message of encouragement would you send out to them?

B: Everything passes. It’s really hard to be in the middle of all the negativity, but it does get easier as you get older. I’m not going to use the slogan, “it gets better…” You’re going to have moments – even until this day I also have those moments. But I think it’s important to just keep your head up and do the things you need to get through to do it. Get through high school, get through college, get through your family. It’s very hard when you’re in that moment and it’s very challenging but we’ve all been there. Once you’re an adult, then you have the opportunity to choose your new family, and choose your life and how to live it.

Q: In one sentence. South Africa is…

B: Fabulous! Come on! I mean it’s beautiful here. I love the weather now too. I was just in the UK and it is boiling hot. This weather is quite lovely and it’s beautiful. I haven’t been to the safari yet and I’m hoping to do that soon. I cannot wait to come back!

Interview has been edited for brevity and clarity.