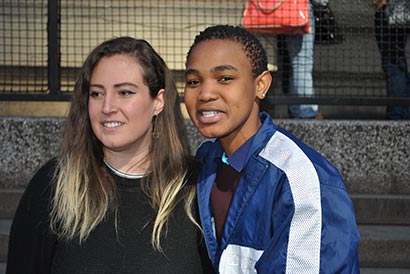 After months of chasing after the Department of Home Affairs, bi-national lesbian couple, Wendy Kessman and Nomfundo Ngidi, were finally granted a spousal visa, but without the right to work or study in South Africa.

“It’s a victory. It’s been a very long road, and we’ll be able to see my family and we’ve already made plans. It is exciting to be able to do that now,” said the US born Kessman, who was repeatedly denied a spousal visa by Home Affairs for over a year.

Without the visa, Kessman could not live in the country with Ngidi, her legal South African wife, and they could also not leave the country to go visit Kessman’s family in America together.

The frustrated women were forced to go to the courts to get a response from the department to their final appeal. Last month, the South Gauteng High Court ordered the director general of Home Affairs to respond to the couple’s request in writing, within 10 working days.

Despite the fact that the department ignored the August 17 deadline and only responded to the order nearly two weeks later, the couple said they are happy that they finally got a visa. There is a catch, however; while the visa allows Kessman to live in South Africa and come in and out the country, they were told that it doesn’t allow her to work or study here. “We still need to find out why they cannot make that happen,” Kessman said, speaking to Mambaonline.

“We were told by the Home Affairs [that we applied at] in Pietermaritzburg that if she wanted to study or work here, then she should put it on the application and that was what we did. So now they are not mentioning anything about that, [meaning] we’re waiting to hear if we have to reapply for it,” Ngidi said.

Nonetheless, the couple still sees the granted spousal visa as a major step forward. They have now asked their lawyer to clarify the limitations of the visa and how to proceed to ensure that Kessman is allowed to work and study in South Africa. “So we’re not finished,” said Kessman.

She commented that it was concerning that they had to go to the courts and ask for help from the Deputy Minister of Justice, John Jeffery, in order to get Home Affairs to simply follow the law and act constitutionally.

“As much as we can be happy that they have responded, we probably would have not have received a response if it wasn’t for the support we got from the media, advocacy groups and the Department of Justice,” Kessman added.