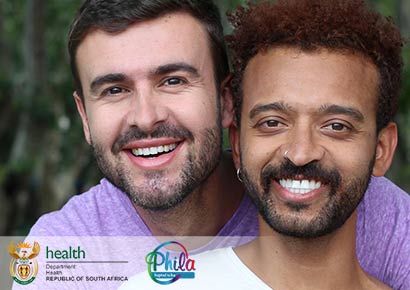 Think you know it all? Your sexual health is a lifelong journey and not a destination, that’s why it’s important to stay informed when it comes to HIV and STIs. Here’s what every man who has sex with men needs to know.

HIV is a virus that can be passed on from someone who is infected (HIV positive) to someone who is not (HIV negative). It is commonly passed on through sexual contact. HIV attacks your immune system and over time weakens it to such a point that your body cannot fight infections. This can make you seriously sick. This stage is referred to as the AIDS stage. AIDS can be life threatening.

How common is HIV?

Can HIV be cured?

HIV cannot be cured and the virus stays in your body for life. The good news is that with treatment it can be controlled and those who are positive and on treatment are able to live healthy and long lives. To keep HIV under control you need to take medication, known as ARVs. ARVs reduce the amount of HIV in your body so that the virus does not affect you. If you stop treatment, the amount of HIV will start increasing in your body again and will attack your immune system, and you will get sick.

Why should I get tested regularly for HIV?

If you are HIV positive, the sooner you start treatment the better, as this will avoid further damage to your immune system and health. Treatment will also reduce your chances of passing it on to others. That’s why getting tested regularly (ideally every three months, if you are sexually active) is a great idea.

If I am HIV positive can I have a normal sex life?

More good news! Once your ARV treatment sufficiently reduces the level of HIV in your body, the HIV is said to be “undetectable”. This does not mean that you are cured. The health care worker or doctor who monitors your HIV will tell you when your HIV is considered undetectable. This is not only good for your health but also means that you can no longer transfer the virus and infect another person. But remember, you need to keep taking your ARVs and must have your HIV levels monitored regularly to stay undetectable. To be safe, it’s recommended that you and your partners use condoms (such as Max condoms) and water based lubricant. And to be doubly sure, if your partner is HIV negative, they can take PrEP to further avoid the risk of infection (see below for more).

What are STIs and should I be concerned?

STI stands for “sexually transmitted infection”. These are a wide range of infections that are passed on through unprotected sexual contact. They can be caused by bacteria, viruses or parasites. You may have heard of some of the most common STIs, such as Chlamydia, Gonorrhoea, Genital Herpes, Hepatitis A, B and C, Warts / HPV and Syphilis. Symptoms can include a burning sensation when peeing or ejaculating and / or discharges, warts, sores, or blisters on or near your genitals, mouth or anus. Some STIs don’t have obvious or visible symptoms but can still be passed on to your sexual partners.

How do I prevent STIs?

That’s pretty simple. The best way to prevent STIs is to use condoms (such as Max condoms) with water-based lube. Remember, HIV medicine such as ARVs or PrEP (see below) do not protect you from STIs.

Can STIs be cured or treated?

In most cases, yes. A course of medicine will usually get rid of an STI. However, some STIs, such as certain types of Gonorrhoea, are becoming increasingly resistant to drugs and may be more difficult to treat. So it’s better to not get an STI in the first place. It’s also important to get screened regularly for STIs. Early detection means that an STI is that much more easily treatable and has less chance of damaging your health.

So, what’s this PrEP that everyone’s talking about?

PrEP is a pill that you can take daily (every day) if you are HIV negative, to stop you from becoming infected with HIV. If you take it daily, it offers more than 90% protection from HIV. PrEP is a good option if you are HIV negative, are sexually active and at substantial risk of getting HIV (such have many sexual partners). PrEP only works for as long as you take it. It can protect you from HIV, but it does not help at all when it comes to STIs.

Where can I get PrEP?

So what’s my best option for staying sexually healthy?