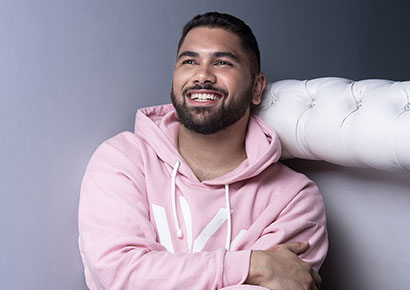 Last month, Craig Lucas, the winner of season two of The Voice SA, came out on social media with a powerful letter to his family, friends and fans.

Lucas, 25, who won the singing contest last year, is from Elsiesrivier in Cape Town and always secretly wanted to sing. He promised his mom, however, that he would study first and earned a degree in Economics and Politics at UCT.

Despite his ambition, he faced another hurdle: he suffered from debilitating stage fright. After he tried performing in high school he stopped altogether. Then, in 2016, he took the plunge again and auditioned for The Voice SA.

Despite never having sung in front of so many people, Lucas’ blistering audition version of The Animals’ House of the Rising Sun saw him earn a place in the show. The rest is history: with his emotive, soulful voice and vocal range, Craig won the coveted title and was immediately signed to Universal Music. He released his first album Restless in October 2017.

It’s a remarkable story but by recently coming out Lucas has also become one of our few proudly out queer entertainers. In an exclusive interview with MambaOnline he opened up about his sexuality and his struggle with depression.

Firstly, congratulations on coming out. What kind of response have you had?

I received thousands of message and haven’t been able to get to all of them, but from what I’ve seen, the response has been overwhelmingly positive. There were a few messages from people bringing up their religious beliefs, but those were THEIR beliefs and have no direct impact on my life. My family and friends have been incredibly supportive.

How do you feel now that you’ve taken this step? What impact has it had on you and your feelings about yourself?

I feel oddly normal, but then again, I haven’t felt “normal” in a while so normal feels amazing. I am very proud of myself for being able to do what I did. I feel strong. Me writing and posting that letter was mostly about me taking ownership of myself – my sexuality, my mental health and my music. It was about me owning up and admitting to myself that I wasn’t doing too well so that I can actively try and become better, and I feel like I’ve achieved that. The letter didn’t really fix anything, but it was the beginning of a journey to self-love that I desperately needed to undertake.

You came out to your family and friends some time ago. How was that received?

I came out to close family and a few friends in 2016. My friends were great, but my family was a little harder. Someone who was like a father-figure to me completely cut me off; up until today he won’t even be in the same room as me. My mom accepted me only because I was her son. I could tell that she was embarrassed, and hurt. We rarely spoke about it. She knew but we just pretended as though everything was okay. I was never angry at her though; our parents grew up a certain way and were taught to think a certain way. It is very hard to unlearn the conditioned way we think and act. Over the last couple of years I’ve seen my mom question her beliefs, and I’ve seen her actively try understand more about sexuality and become more accepting and understanding and that is all I could ask for.

You said that when you started competing on The Voice, you were urged to not come out. Who was it that urged you to stay in the closet?

It was mostly friends and family. I know that it came from a place of concern. Often on any sort of reality show people become so invested in their favourite winning that they become so mean; we are urged to stay off social media because it gets so ugly at times. I was a young inexperienced guy from an area synonymous with gangsterism and crime, and in as much as the public loved and supported me, there were also many people who didn’t. The Voice has a fairly conservative audience and so it became a matter of not giving them any more ammunition. 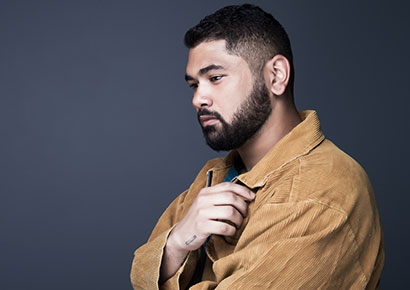 While there’s a growing wave of performers and entertainers coming out internationally, that’s not been the case in SA. Why are we lagging behind?

When deciding whether or not to post the letter, I kept thinking about artists like Sam Smith and Calum Scott who had come out and were still successful. It hadn’t really occurred to me that these were all international artist and that coming out locally was pretty taboo. The South African market is small, comparatively, and very competitive. I think artists are so scared of losing support that they’d rather keep their private lives a secret if it meant people [not] coming to their shows and buying their music. The sad reality is that the fear that coming out might impact your career is legitimate.

We recently requested an interview with a gay television celebrity and were told that he is not ready to come out because he’s just started his career. What advice would you give him?

The unfortunate truth is that homophobia is everywhere and may just affect or hinder somebody’s career development. Everyone’s situation is different. I only came out when I did because it was the right time for me. Music is holy to me, and I’ve been blessed with the opportunity to do what I love for a living. Not many people are so lucky. There was no way I could enjoy making music if I weren’t allowed to be true to myself – I might as well have gone back to working in the corporate industry. I would have started to resent music and being in the public eye, when I should have been grateful and receiving all these blessings with open arms. The only advice I would give him is to never forget that there is nothing wrong with him – it’s so easy to start internalising the things people say about you, or the fact that you’re hiding parts of yourself. Just always remember your worth and all that is good about you as you walk this journey of self-acceptance.

In your letter, you said that realising that you were in love with your friend came as a shock. Had you never had any feelings for men before at all?

None whatsoever. I’d dated a couple girls in high school. I lived a very sheltered life, and it wasn’t until I got to university that I became equipped with the right information to be able to understand more about myself.

Does your friend know about your feelings for him, and how has that played out?

I cut contact with him the second I realised I was in love. We haven’t spoke since. I don’t think he knew. If he read the letter he would know it was about him.

Seeing as you previously had relationships with women, do you see yourself as gay, bisexual, sexually fluid, queer?

I’m still trying to figure that out. I’ve only ever really been with one guy, who I met a week after I came out and who I am still with nearly three years later. I haven’t really thought of being with a girl since. I did enjoy having sex with girls before, but that might just have been because I didn’t know better. I would consider myself bisexual but I know that there is a lot to my sexuality that I haven’t given myself the chance to understand. So I’m trying to figure it out. That letter was the first step in this journey of self-discovery.

How do you feel about these kinds of labels that we use in the community?

I think labels are important for the overall community because they help in building awareness. They can validate the existence of someone’s sexuality and identity and makes it easier to access a community of people like you and make you feel like you belong and could point you in the direction of resources that could help you specifically. Labels can allow someone to express themselves more freely and can be a source of pride. On a more personal scale, I do worry that a label might place unnecessary limitations on me right now so I’m not too hung up on it.

What kind of impact did living in the closet, especially as a public figure, have on you?

Your coming out note not only addressed your sexuality but also the issue of mental health. Do you think that struggling with your sexuality contributed to your depression?

It did. I started isolating myself because it was easier to be alone than be out in public and pretend to be someone I wasn’t. Even when I was out in public, I would keep everyone at a distance. This level of isolation coupled with how much I was drinking was a really toxic combination.

LGBTQ people suffer more from mental health issues and higher rates of suicide that others because of stigma, lack of acceptance and discrimination. What advice would you give to a young LGBTQ or queer person struggling with mental health problems or considering self-harm?

Please get help. It is the only way to get better. Reach out to someone you trust. Depression is very hard to manage by yourself.

Are you still promoting your album Restless or are you working on a new album?

A bit of both. I think there is still a lot on Restless worth promoting and a lot of people who haven’t heard it yet. I have however been writing a lot of new music that I’m excited to pursue.

How will being open about who you are and who you love change your song-writing?

My brain is free from all that mental clutter I was carrying around. I am able to think more clearly. My song writing has become so personal now because I am allowing myself to be honest. 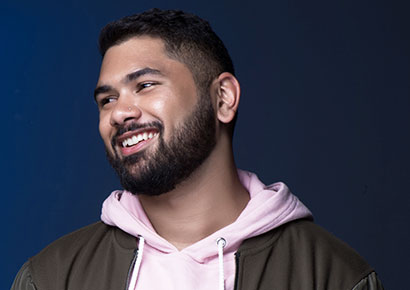 Do you think that hiding important aspects about oneself affects the authenticity of an artist’s work?

Absolutely. People crave and appreciate authenticity and can often tell when the artist is being authentic or not. Artists are real people with real problems just like everyone else and I think people resonate with that.

We were amazed to learn that The Voice was your first attempt at performing again since high school. As a self-described introvert, is performing still hard for you?

I still get nervous at times – particularly for the bigger shows – but I think that’s normal. I enjoy being on stage now though. The crippling stage anxiety I had is gone and that is in large part thanks to the support and mentoring you get on The Voice.

You are likely to have a host of new fans now. When and where can we next see you perform?

If you are suffering from depression and / or are considering self harm, get help through one of these LGBTQ organisations: Triangle Project in Cape Town, OUT in Pretoria, the Gay & Lesbian Network in PMB, or the Durban Lesbian & Gay Community & Health Centre. Or call LifeLine’s 24 Hour Counseling Line on 011 422 4242 or 0861 322 322 or the South African Depression and Anxiety Group’s Suicide Crisis Line on 0800 567 567.