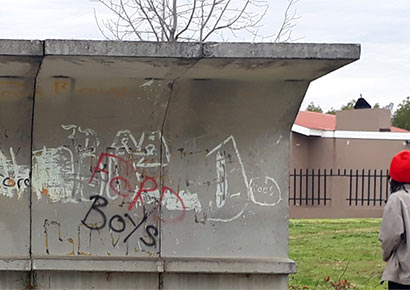 As a young gay man fights for justice after being raped twice, there are reports that these incidents could be on the rise in the Western Cape.

A year ago, the man from Ceres, who we have named ‘M’, was allegedly raped by a group of young men, after they called him a “moffie naaier”.

It’s believed that the alleged rapists are members of a notorious gang in the area called The Ford Boys, which has terrorised residents. Like most locals, M was too afraid to lay a charge of rape or report the incident when he was first attacked. Things changed when, he claims, he was again raped by gang members three months later.

This time, his fear of becoming the ‘next David Olyne’, spurred him to take action. The 22-year old Olyne, also from Ceres, was murdered in 2014 in a brutal homophobic attack. He was tied with wire, beaten, kicked and set on fire as a group of youths watched on.

M has been allowed by the court to testify via camera in order to protect his privacy and to avoid having to face his alleged attackers. The Ceres court is equipped with CCTV to enable witnesses to give evidence in camera so as not to be in close proximity to the alleged perpetrators when doing so.

“Court is a very intimidating space, particularly when it comes to sexual offences, where the accused are only steps away from the victim giving testimony,” explained Sharon Cox, Health and Support Services Manager at Triangle Project, which has been tracking M’s cases.

“Triangle Project have monitored previous cases of male rape and they have never been easy,” said Cox. “For many reasons, males [who are raped] are far more reluctant to lay charges and those who do, go through a criminal justice system that is heteronormative for the most part, in it’s thinking and language.”

She cites an example last year, in case monitored by Triangle in the Witzenberg district. “The attending doctor was on the stand as a witness. The magistrate begun questioning her, and two of the questions were, ‘when conducting the examination, could you tell if D is gay’ and ‘could you tell if D is a virgin.'”

Cox commended M for “his strength and his courage in the face of threats that are very real, and his willingness to take two cases through the criminal justice system; not only for himself but for others who may fall victim to these Ford Boys.”

Cox also revealed that within the space of a week the Triangle Helpline had received three calls from gay men who had been raped. In one of these incidents, the person had been to a gay bar and his drink was likely spiked as he was not drunk but had little recollection of how he ended up where he did.

According to the 2016 report, Hate Crimes against Lesbian, Gay, Bisexual and Transgender (LGBT) People, 13% of LGBT men have reported being sexually abused or raped.

What to do if you are raped

• Get to a safe place immediately.
• If you are injured, go straight to the hospital or other medical facility.
• Do not shower or bath and keep your clothes for purposes of evidence.
• Report the rape at your nearest police station. You cannot be turned away, regardless of your gender and / or sexual orientation. (Under the law, men can also be raped.)
• Police should assist you to get to a hospital or clinic for treatment and a forensic examination.
• You have the right to receive treatment for any injuries (even if you choose to not report the rape to the police).
• You have the right to be given PEP treatment within 72 hours of the rape to help prevent you from becoming infected with HIV.
• Get support from a counselor or psychologist (contact one of the organisations below).