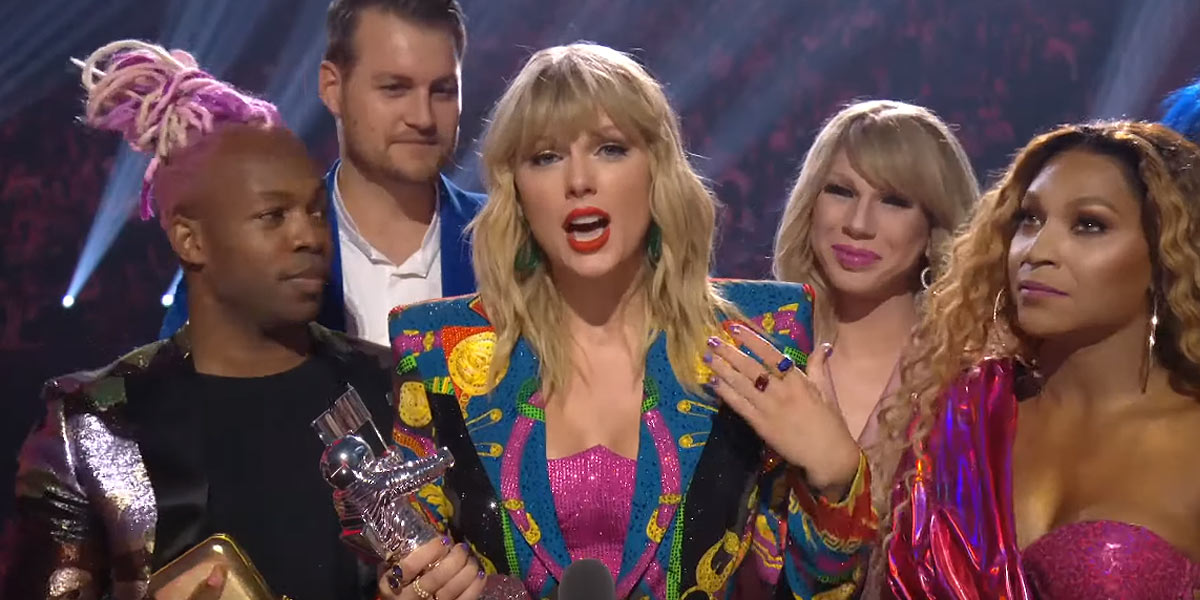 Swift, who has just released her new album, Lover, won both the ‘Video of the Year’ and ‘Video for Good’ awards for You Need to Calm Down, a clip and track that promotes LGBTQ equality and features a host of queer celebrities.

The video also includes a call to sign a petition – started by Swift – urging American lawmakers to pass the Equality Act, which aims to protect LGBTQ rights across the US.

The singer-songwriter performed the song to open the show, backed by a huge rainbow and the words “Equality Act” appearing on the screen behind her.

Swift was joined on stage by a group of drag performers to collect the coveted award and used the opportunity to speak her mind and take a jab at Donald Trump.

She pointed out that the video, with its anti-homophobia message, had been chosen for the award by the public. “So you voting for this video means that you want a world where we are all treated equally under the law,” Swift said.

“I want to thank everyone who signed that petition because it now has half a million signatures which is five times the amount it would need to warrant a response from the White House,” Swift commented while looking at her watch sarcastically. She also thanked the cast of the video for living their “lives so authentically,” adding, “thank you for being the example that you are.”

LGBTQ media lobby group GLAAD, which is mentioned in You Need to Calm Down, tweeted afterwards: “Thank you @taylorswift13 for using your #VMAs Video of the Year win to bring attention to the #EqualityAct.”

The 20-year-old rapper, singer and songwriter recently broke the 23-year-old record previously held by Mariah Carey and Boyz II Men’s song One Sweet Day for the longest-running No. 1 single ever on the Billboard Hot 100 chart.

The star performed his new song Panini at the event and wowed fans when he arrived on the red carpet wearing a sparking suit and ruffled lace shirt by Christian Cowan, said to be inspired by Prince.

Speaking to GLAAD on the red carpet, out former NSYNC member Lance Bass praised Lil Nas X for breaking new ground as a queer artist. “The way that he was accepted, it was incredible. From country music and the hip hop world.”

The ‘Video Vanguard Award’ was presented to the legendary Missy Elliott for her incredible contribution to the medium with her string of innovative videos over the years.

I love this so goddamn much and wish I had Lil Nas X at the VMAs when I was a kid 😭😭😭 pic.twitter.com/LeTWcgHN8a