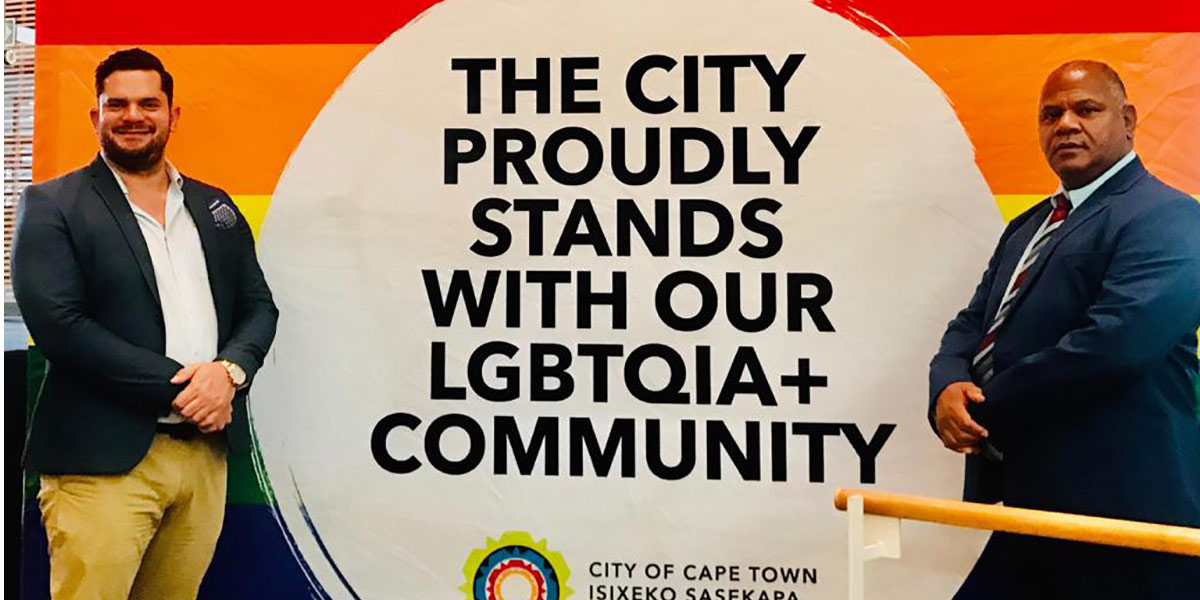 The City of Cape Town and Mayor Dan Plato have expressed their support for the LGBTQIA+ community as the world marks International Pride Month this June.

On Friday, the City of Cape Town erected a banner that “unequivocally affirms our position as a government committed to inclusion, equality, freedom and human rights.”

The DA Cape Metro LGBTQIA+ Committee Chairperson, Councillor Roberto Miguel Quintas, and Executive Mayor Dan Plato visited the Council Chamber where the banner will remain in a prime position on the Speaker’s dais for the foreseeable future.

“Thank you Speaker Dirk Smit for unreservedly supporting my request to have the banner placed in the Chamber, and thanks to Cllr Sharon Cottle, MMC for Corporate Services for green-lighting the artwork and budget,” said Quintas.

The banner will be used at all LGBTQIA+ events, workshops and conferences supported by the city, and “will serve as an ongoing affirmation of our stance on freedom and rights.”

Quintas added: “It’s is a moment of Pride, to see this banner in its home, at the seat of the city’s local government, and know that it’s bold statement is one that we, as a caring and inclusive city, continue to strive toward.”

Cape Town has been one of South Africa’s most publicly supportive cities when it comes to marking LGBTQIA+ Pride, both in June and during the city’s own Pride season in March.

The city and the Western Cape province, however, continue to have a high rate of anti-LGBTQIA+ hate crimes.

International Pride Month is marked around the world in June to commemorate the New York City Stonewall Riots that took place in 1969. The event, in which the LGBTQIA+ community revolted against police raids on the Stonewall Inn queer bar, is credited with sparking the international Pride liberation movement.