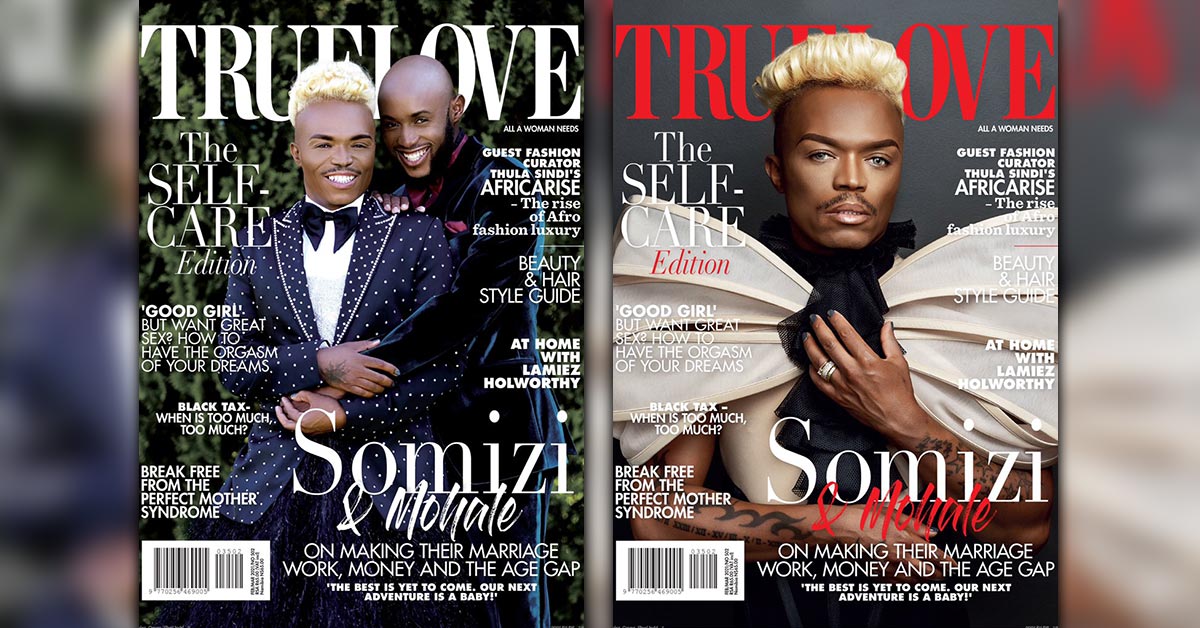 Somizi Mhlongo and Mohale Motaung, South Africa’s most high profile gay couple, shine on the cover of the latest issue of True Love magazine while opening up about the state of their marriage.

The February/March edition of the iconic South African publication features not one but two glamorous cover options: One with the Idols SA judge posing alone and another with Somizi and Mohale in a tender embrace.

Inside the pages of the magazine, the two men – whose wedding was featured in a four-part hit television special last year – speak about some of the controversies they’ve faced, most notably the ongoing gossip that their marriage is on the rocks.

Somizi recently drew the ire of the South African National Editors’ Forum when he lashed out at a City Press journalist who had contacted him about an article concerning claims that alleged infidelity in the relationship “had led to divorce talks”.

Instead of giving his response to the rumours, Somizi threatened to sue the journalist, shared her number on social media and urged his followers to let her “know what it feels like to have yo privacy invaded unprovoked.”

The True Love article, accompanied by a glitzy loved-up photoshoot, is the couple’s defiant response to their naysayers and to speculation about their relationship.

Somizi insists, for example, that while he did expose his marriage to the public and gave them a “glimpse into my life” that “doesn’t mean I don’t have a right to privacy”.

And while the couple say that they are still very much together and in love, they admit that it’s not always smooth sailing and they sometimes do need their own space.

“Mohale and I have never split up, but we have challenges just like any other couple out there. We’re fortunate that we have other homes to retreat to when we choose not to be in the same space, so we either go to our home in the Vaal or Zimbali,” Somizi told True Love.

Mohale added: “We try to never forget why we fell in love, especially when we hit a low point. What is important is where we want to see ourselves.”

The couple also go on to address their 22-year age difference and deny suggestions that Mohale is with Somizi because of his money. “There were never limitations and he has never made me feel that I am young and that he is older. Love is love and if you love someone, age doesn’t matter,” said Mohale.

Whatever we may think of the ongoing drama and controversy surrounding Somizi and Mohale, it’s still an undeniably powerful and affirming statement to have a same-sex couple gracing the cover of a mainstream magazine.

The February/March 2021 edition of True Love is out now.

It is finally here… the cover we’ve been dying to reveal to you!

Our brand new @somizi collaboration covers featuring the star and his husband, @mohale_motaung , for our Feb/March issue will be available in stores from today 😍 pic.twitter.com/WFlBK2p6FW