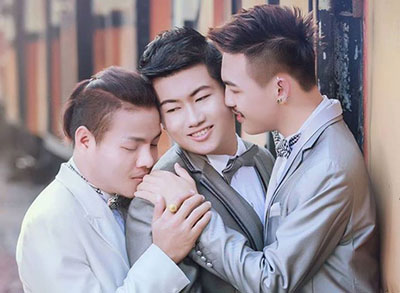 These three men recently married one another in Thailand, although the nuptials are not legally recognised there

In an unexpected move, the Constitutional Court has ruled that polygamous same-sex marriages must be legalised in South Africa.

In the groundbreaking ruling on Wednesday, the court said it is unconstitutional to limit marriage between more than two partners to only a man and multiple women.

While the law has thus far only allowed these marriages to be between a man and one woman or a man and multiple women, the court ruled that this is discriminatory and unfair.

It said that the practice should be open to all South Africans, regardless of culture, gender or sexual orientation.

“Our Constitution is based on the ideal of true equality for all of our citizens. No particular cultural group or gender should be advantaged over another,” said Constitutional Court Justice Chris Madlanga.

The case was brought to the court by Josef Malinga, a Johannesburg academic who argued that he should be allowed to marry his two male and one female partners, a practice called polyamory.

“This is a victory for freedom,” he said after the ruling. “We should all be allowed to love who we want and how we want – and to be given legal protection like all other married couples.”

Malinga will be free to marry his partners after Parliament changes the Marriage Act within 90 days, as directed by the Constitutional Court.

Legal experts say the implications of the ruling are still unclear but it could have as yet unknown social, legal and economic consequences. Commentators expect traditional leaders to be outraged by the surprise ruling.

Update: As many readers realised, this article is an April Fools’ Day prank.

Update: A clarification. Our intention with this April Fools’ Day piece was to point out the absurdity of allowing certain people from certain groups to have certain rights that others don’t (based on culture, gender or sexual orientation). The aim was to get people talking about the issue. In that regard, it seemed to work to some degree. For the record: We FULLY support the right for ALL people to have polyamorist relationships and marriages.