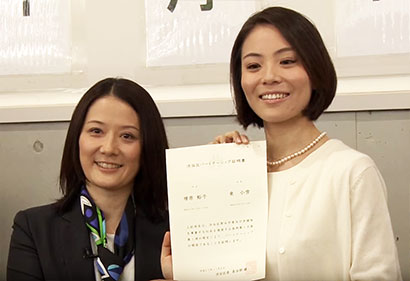 Two wards in Tokyo have begun issuing “proof of partnership” certificates to same-sex couples, seen as a first step towards the legal acceptance of gay and lesbian relationships.

The documents currently have no standing under Japanese law, but are intended to assist same-sex couples in being recognised in everyday scenarios such as hospital visits and accommodation rental.

Hiroko Masuhara and Koyuki Higashi were the first to receive a certificate at the Shibuya district city hall on Thursday.

“I am exhilarated that the city I am living (in) has recognised my partner as my family,” Masuhara told journalists, reported Reuters.

“I hope that this will be a step forward not only for Tokyo but for the whole of Japan to become a more comfortable place to live in, because there are LGBTs nationwide,” added Higashi.

The couple were congratulated by Shibuya Mayor Ken Hasebe. Tokyo’s Setagaya ward was the second in the city to start issuing the partner certificates on Thursday.

Marriage remains defined in Japan as only being possible between a man and woman, although Japanese citizens have since 2009 been allowed to marry same-sex partners in countries where marriage equality is legal.