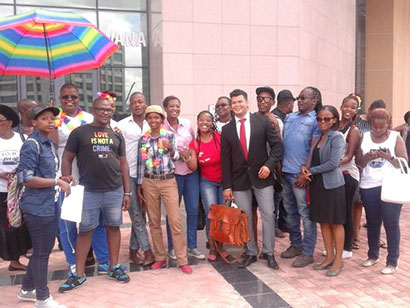 Victorious LEGABIBO members outside the High Court of Appeal (Twitter)

In a significant victory for equal rights on the continent, the Gaborone High Court of Appeal has ruled that Botswana’s lesbian and gay group must be registered by the government.

The Southern Africa Litigation Centre (SALC), which supported the organisation’s legal battle, reported that the court confirmed on Wednesday that the continued refusal to register LEGABIBO as an NGO was “unlawful”.

The court further found that there was no evidence to back up claims by the government that LEGABIBO would be used for purposes “contrary to peace, welfare or good order in Botswana.”

Court of Appeal President Justice Ian Kirby was quoted as saying that, “There is no objective of LEGABIBO to further unlawfulness. Its objective is to further human rights.”

The Botswana government was first ordered to register the organisation in a November 2014 court ruling but it appealed the decision, leading to the confirmation ruling today.

LEGABIBO (Lesbians, Gays and Bisexuals of Botswana), which was formed in 1998, first applied to be registered as an NGO in February 2012.

In 2010, the government amended the employment act to ban discrimination on the basis of sexual orientation in the workplace.

A recent Afro Barometer report found that Botswana is among the most tolerant countries on the continent towards lesbians and gays. It estimated that 43 percent of Batswana would “strongly like,” “somewhat like” or “not care” if they lived next to homosexuals.