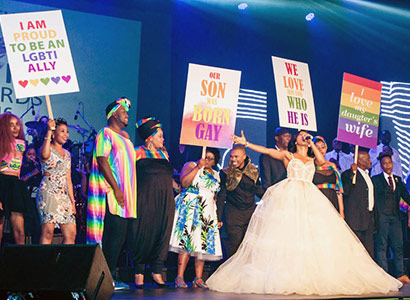 The star-studded eighth annual event, at Kyalami’s Theatre on the Tracks, was hosted by Lumko Johnson and Khanya Mkangisa, under the theme of “it took a community”.

Semenya, winner of the 800m gold medal at the Rio Olympics following weeks of unprecedented controversy, was honoured as the Sports Personality Of The Year.

The athlete, who didn’t make the event, also scored the Role Model Of The Year award as an openly and proudly lesbian public figure and world achiever.

Winnie Madikizela-Mandela was awarded the Diva Extraordinaire Of The Year. While she also didn’t attend (due to illness), presenter Gerry Rantseli delivered a message of thanks directly from the struggle icon.

Rantseli said that Mandela regretted not being there but wanted the LGBTI community to know that she had “fought for the freedom of all”. 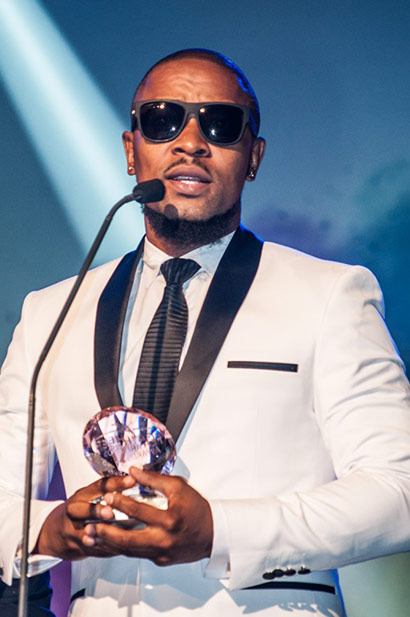 Hunk Of The Year, SK Khoza

The Hunk Of The Year award went to actor SK Khoza, while the Fag Hag Of The Year was singer Wanda Baloyi. She embraced her title, telling the audience: “I walk around with pride as a fag hag!”

In addition to the awards and the celebrities, the audience was also treated to a host of entertainers, including an all-female backing band.

The crowd also gave the incredible Mzansi Gay Choir, said to be South Africa’s first gay choir, a standing ovation after they sang This is a Gay’s World – while impressively sporting high heels.

The night was, however, about much more than glitz and spectacle. The event was attended by members of the Gauteng provincial cabinet, including Premier David Makhura. He told the crowd that he wanted Gauteng to be known as South Africa’s most welcoming province for the LGBTI community.

“We still have a lot of work to do today,” he acknowledged. “We know that in our communities people are being killed for being who they are…”

Makhura announced the establishment of an LGBTI Desk in the Premier’s Office, which will assist the province in dealing with LGBTI issues. He said that it was the first such initiative in any of the nine provinces.

Makhura promised to make sure “every single one of you feels that ‘this is my home, this is where I belong’”.

The African Feather award was presented by the Other Foundation to the Mozambican LGBTI rights group Lambda, which helped secure the country’s historic decriminalisation of homosexuality last year. 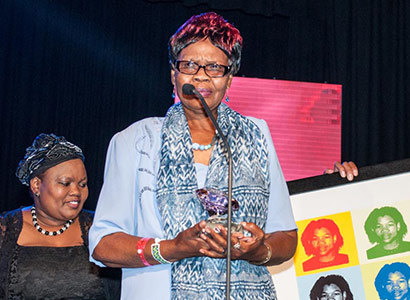 Lambda Executive Director Danilo da Silva said that while the law had changed in Mozambique there was still much to be done. “It takes all of us, the community, to make the changes of hearts and of minds. So, the struggle has not ended,” he explained.

One of the most powerful and emotional moments of the night was when Kgotso and Mally Simelane, the parents of slain lesbian activist and footballer Eudy Simelane, took to the stage to receive the Feather Of The Year award on her behalf.

The body of the 31-year old Simelane, a player on South Africa’s national women’s team, was found in a field in KwaThema township outside Johannesburg in April 2008. She had been gang-raped and died from multiple stab wounds.

The 2016 Feather Awards, a potent and memorable mix of celebration and activism, ended with music and dancing into the early hours of the morning.

Hunk Of The Year
SK Khoza

Musician Of The Year
Babes Wo Dumo

Socialite Of The Year
Duma Ntando

Drama Queen Of The Year
AKA, DJ Zinhle and Bonang;

Feather of the Year
Eudy Simelane