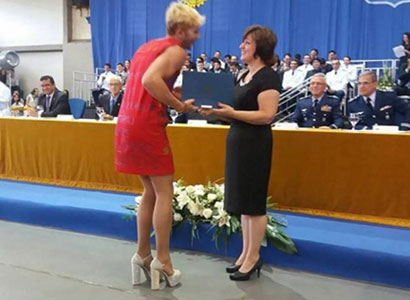 A gay man in Brazil has made a statement against homophobia by attending his air force graduation ceremony in a dress.

He is cheered on by the audience as he rips off a purple cape to reveal the outfit before defiantly walking across the stage to receive the diploma.

Faira said that his aim was to expose the armed forces as “a homophobic institution”.

Writing on Facebook, he explained that it had been a childhood dream to attend the institute. He completed high school at an aviation military school where he was faced with homophobia, before moving on to study further at the ITA.

“I arrived at the ITA and decided that it was enough for me. Accept me as I am or be exposed for what you are. They did not accept me, they insulted me, they violated me, they tried to make me invisible,” he said.

Faira went on to describe how LGBT people in these insitsuations are terrified to be open about their sexuality or gender identity and how they are forced to “lead a marginalised and hidden life”.

“I’m sick of this hypocrisy, this violence, these good people who lie in bed and are not aware of the hatred they propagate and the lives it destroys. I’m sick of jokes, I’m sick of invisibility, violence, everything…”

Faira said that he hoped that his statement will “change you because I will continue to love and make myself very present in the world”.

While Brazil’s laws are largely progressive, including allowing LGBT people to serve in the military since 1969, the LGBT community still faces social stigma and violence, particularly against transgender individuals.