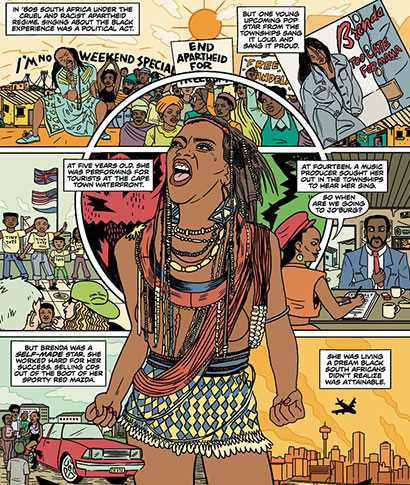 An anthology of comic books featuring notable women from all over the world, Femme Magnifique, has included a South African. The late singer, Brenda Fassie, gets her own comic book.

South African music icon Brenda Fassie is one of the women featured in a comic book anthology, Femme Magnifique.

“I was approached by US comic book editor Shelly Bond to write on a South African for the Femme Magnifique anthology,” said Beukes. She worked with Bond previously on graphic novels Survivors’ Club and Fairest: The Hidden Kingdom.

Both Venter and Beukes work at the same office, but had not collaborated before. “We’ve been dying to do something together for ages,” said Venter. “She received an invitation to participate and immediately cornered me to do art.”

Beukes knew from her first book, Maverick, a pop history on women in the country, that there were many who could fit the bill for Femme Magnifique. “I had many to choose from, from Lilian Ngoyi to Ruth First, Krotoa Eva and Sara Baartman.

“But Brenda Fassie worked on so many levels, as a provocative pop star, as a lesbian icon [she came out on Mambaonline in 2003], as a black woman who lived through apartheid and sang about the personal and the political.”

Beukes said Fassie had an incredible voice, both in her singing and in how fearless she was in being herself. “Her songs made the personal political, from Black President to Too Late for Mama, she sang about the lived black experience.

“Nanna and I pitched Brenda Fassie, because we thought she would be the most fun to do,” explained Beukes.

It was a way to introduce Fassie to an international audience along with other female heroes, from astronaut Sally Ride to Nina Simone and Michelle Obama, all featured in the anthology.

Venter said she felt pressure to do justice to an icon such as Fassie. “Brenda was the first person to say that she ultimately ‘belonged to the people’. She had an immense celebrity which has always been well-documented, and part of the public domain in South Africa.”

For the artwork, Venter said she and Beukes remixed Fassie’s rich legacy to reflect it back to the world in a new form, so a new audience could appreciate it.

The story is a biographical look at Fassie’s life and cultural legacy. “Like the rest of the comics in the anthology, it’s only three pages long, so it was hard to condense it,” said Beukes.

But with comics, Beukes said, the art did a lot of work too. “Nanna was able to nail her iconic looks and show her through the ages.”

Venter said despite having two weeks to complete the comic, it came together “super quickly”.

It will be released in September and the team at Femme Magnifique are working on international distribution.

This article was first published by Brand South Africa.