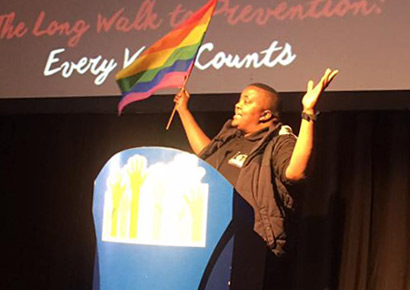 In what’s believed to be a first, a national HIV plan to address the specific needs of the LGBTI community was launched at the 8th South African Aids conference in Durban on Wednesday.

Presented by the SA National Aids Council (SANAC), the plan is the culmination of a 10 year process, and will be included in the new South African National Strategic Plan on HIV, TB and STIs for 2017 to 2022.

Speaking at the launch, Steve Letsike, Chairperson of the SANAC Civil Society Forum, addressed the significance of re-affirming LGBTI identity and community in the strategy.

“It is important to realise we have fought and argued to be called LGBTI instead of MSM (men who have sex with men) or women who have sex with women (WSM) because we didn’t want to be looked at only as behaviours. A lot of that speaks to behaviour. When we forget identities we put ourselves at risk,” she said.

Letseke told Mambaonline that the plan is a framework which the Department of Health and other government departments must now use in their provision of services to LGBTI people. “We now have a document that we can hold the government accountable to,” she said.

The plan aims to reduce HIV by 63% and TB by 30% and increase the detection of STIs by 70% within the LGBTI community over the next five years.

It not only focuses on direct health issues but also the context in which LGBTI people find themselves, acknowledging that societal stigma and discrimination affect their access to public services. The plan thus looks at five key areas: health, empowerment, psychosocial, evaluation and human rights.

These are not only strategies to deliver services such as PEP, PrEP, condoms, lube, testing and treatment, but to also empower LGBTI communities through education and information campaigns, creating safe spaces and building up community organisations.

The plan also intends to support human rights by helping to provide legal and paralegal support to LGBTI people and encouraging informed and sensitive law enforcement and protection.

“Implementing these five areas will lead to increased access to health services and the creation of an enabling environment to improve the health of LGBTI people,” said SANAC in its presentation.

SANAC explained that a plan focusing on the LGBTI community was desperately needed because it is an especially vulnerable one in South Africa. LGBTI people still face social exclusion, discrimination, prejudice, violence and even murder.

“This marginalisation can and does erode lives, with high dropout rates at school, rejection by families, unemployment and mental health issues… [including] depression, anxiety and suicide…”

“Many LGBTI also find barriers to accessing public services, including health, and avoid seeking services fearing discrimination, judgment and a lack of confidentiality. There is an urgent need for services designed for their needs,” said SANAC.

The launch event was attended by KwaZulu-Natal Premier Willies Mchunu and included performances by the likes of Manila Von Teez and Miss Gay Durban.

Mchunu expressed his hope that, “what is launched here today [will] not just be on paper but [will] be implemented as well”.