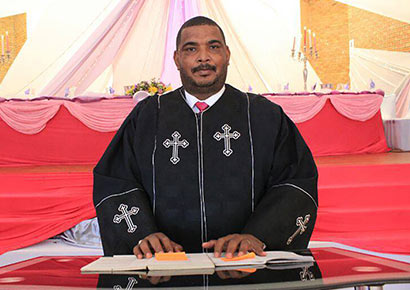 Unrepentantly homophobic Cape Town pastor Oscar Bougardt is once again attacking the LGBTQ community, this time proclaiming that gays and lesbians are to blame for the city’s drought.

On Monday, Bougardt took to Facebook to expound his views on the pending disaster in the Mother City, which could see taps running dry in April.

He asserted that the drought was caused by God in judgment against the “perversion” of homosexuality.

“Blame ‘drought’ on wickedness and homosexuality and church leaders who fail to preach the Bible and sodomite abomination,” said Bougardt.

“I believe that this drought is God divine judgement over a City of Cape Town that has turned against God and accepted the lifestyle of sodomites as normal. Couple of years ago I predicted that God will strike all countries and city who chose pervertion instead of the holy ways of God with natural disasters, it is happening right here at home.

“This is just the beginning, turn to God and let all these reprobates burn in hell,” he said. “Cape Town is the capital sodomite city of the world and it leaders are wicket, do not be surprise more natural disasters coming.”

Bougardt also claimed that last year’s fires that ravaged Knysna – which hosts the annual Pink Loerie LGBTQ festival – were also God’s revenge for it being a “gay city”.

He added: “Homosexuality is an abomination. We suffer because our leaders has accepted wickedness as normal. More disasters to follow, turn back to God wicked people.”

Bougardt is facing charges of contempt of court for failing to uphold a 2014 court approved settlement with the SA Human Rights Commission (SAHRC) regarding his previous hate speech statements.

In it, he agreed to stop making discriminatory or hateful comments against the LGBTQ community. He also apologised and asked for forgiveness.

However, he soon after went back to attacking and demeaning LGBTQ people on social media and in the press, including making hateful comments on Mambaonline. Because he has blatantly failed to uphold the agreement, the SAHRC wants the pastor to be jailed for 30 days and fined R500,000.

In July 2017, Bougardt said that he “will never apologize for preaching God’s Word” and that “the SAHRC is being managed by a bunch of f*****s who are controlling them.”

The SAHRC is now waiting for the Equality Court to set a date for the proceedings.

Since at least 2011, Bougardt has conducted a vile campaign against the LGBTQ community, accusing gay people of being child molesters, of being sinful perverts and even appearing to call for their execution.

Bougardt has aligned himself with American hate evangelist Steven Anderson; visiting him in the US, and promising to open branches of the banned preacher’s church in South Africa. 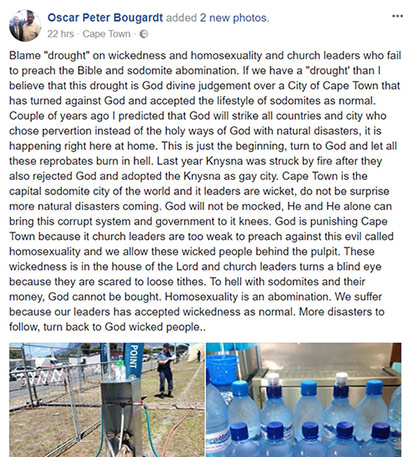