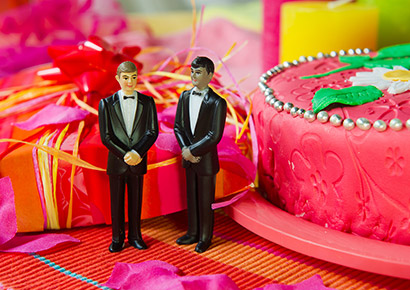 The clause, Section 6 of the Civil Union Act, has long been identified by LGBTQ activists as an unconstitutional and discriminatory flaw in the law that legalised same-sex marriage in South Africa in 2006.

The provision allows marriage officers employed by the state to refuse to solemnise civil unions if they personally object to same-sex relationships on the grounds of their “conscience, religion [or] belief”.

This has resulted in many same-sex couples being turned away from Home Affairs branches that have no officials willing to marry them. Mambaonline has for years reported on the humiliating and degrading treatment received by these couples.

In July last year, the then-Minister of Home Affairs, Hlengiwe Mkhize, said that around 37% of marriage officers were exempted from performing civil union marriages. In a September 2016 report, Mambaonline found that only 26% of branches in the country offered the service.

On Thursday, Carter lodged the Civil Union Amendment Bill, a private member’s bill that aims to repeal Section 6 of the Civil Union Act, with the Office of the Speaker of the National Assembly.

“In my mind this provision was clearly unconstitutional for a number of reasons”, said Carter. “Firstly, our Bill of Rights, as enshrined in section 9(3) of our Constitution, provides that the state may not unfairly discriminate directly or indirectly against anyone on a number of grounds, including those of gender, sex and sexual orientation.

“Secondly, Chapter 10 of our Constitution, which sets out the values and principles governing our public administration provides that services must be provided impartially, fairly, equitably and without bias,” she said.

In it’s explanatory notes, the bill points out that there is rightly no provision in the law for Home Affairs marriage officers who are Christian to refuse to marry Muslim couples, or those who have racist beliefs to refuse to marry an interracial couple.

“Clearly, it cannot be constitutionally acceptable or permissible that public servants can be exempted on any grounds from providing services to certain sectors of our society, in this instance for designated marriage officers to solemnise same-sex couple marriages,” said Carter.

“Discrimination is just not right,” she told Mambaonline. “This is nothing else but discrimination. We all have equal rights. And we don’t only have rights under the Constitution but we also have responsibilities.”

The bill follows her request last year for the minister of Home Affairs to consider introducing amending legislation to repeal Section 6. “Unfortunately, the Minister did not reply in the affirmative nor take the initiative,” said Carter.

When asked how she’d respond to the argument that repealing Section 6 would infringe on the religious freedom of marriage officers, she replied: “It’s your choice to become a marriage officer and to be an employee of the state. And if you don’t follow the Constitution and laws of our land, then what are you doing in that position?”

She added: “The Bill of Rights is very clear: no one may directly or indirectly discriminate against anyone on a number of grounds, including sexual orientation.”

Once published in the Government Gazette for public comment, the bill will be assessed by the Home Affairs Portfolio Committee in Parliament. The committee could vote to reject the bill outright, call for a public hearings process or send it directly to MPs for a vote.

Igor Scheurkogel, Chairperson of the Board of Directors of Mr Gay World, who created an online petition calling on the government to amend the Civil Union Act, told Mambaonline that he was “very excited” to hear about Carter’s bill.

“It’s a good feeling when members of the public can go to an MP to demand change and they listen. This serves as an encouragement to the public that we must hold government accountable,” he said. “It all started when Mambaonline released their report in 2017 stating that only 117 of the 409 Home Affairs offices do same-sex marriages,” he noted.

“With the introduction of the private members bill, this pipe dream we had in the middle of 2017 to ensure equality could become a reality. We now need every LGBT South African to lobby their public representative to support this bill and ensure inclusivity for all South Africans.”