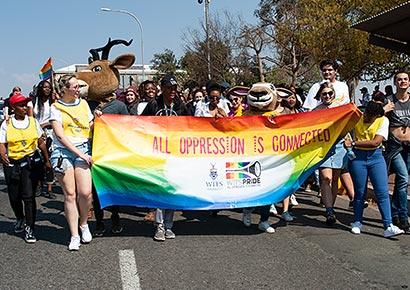 Wits University recently celebrated its 10th annual LGBTQ+ Wits Pride march, with “Not On My Watch” being this year’s theme.

The campus-based Pride was a four-day commemoration with a total of 16 events which included panel discussions and film screenings around LGBTQ+ issues.

Dan Lee, deputy chairperson of LGBTQ+ student group Activate, said that these events served as platforms for LGBTQ+ individuals in and around the university to talk about issues that directly affect them.

Despite the defacing of walls painted in the colours of the rainbow and transgender flags with homophobic and transphobic slurs that marred the start of Wits Pride, the march went ahead on Friday, last week. It saw students and the greater public attend, uniting to celebrate the lives of queer bodies, both living and dead.

The event commenced with students, some in bright rainbow colours, assembling in front of the university’s Great Hall. They were treated to fierce dance routines and sex ed talks before starting the march. The group walked through the campus carrying banners and singing joyful songs, attracting more students to join them.

The march was also meant to raise attention on the need for the university and student body to look into ways of fully embracing LGBTQ+ students. “Although formally, the University recognises the needs of queer students, the student body itself can be very resistant to visible, radical queer self-expression,” Lee earlier told Mambaonline.

He added that the university’s bureaucratic mechanisms are also not always accommodating of LGBTQ+ needs: “At the moment, there is no classification of student clubs that recognises that we represent a disadvantaged group, so we have to be lumped in with sports clubs and the sort. This means, for example, that we have to join a line of sports clubs in waiting for a clubhouse.”