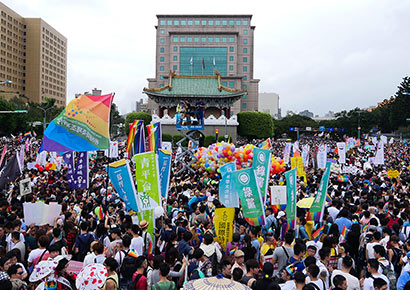 Millions of voters in Taiwan have rejected both marriage equality and LGBTI inclusive education in a series of referenda held on Saturday.

According to reports, more than six million citizens backed the definition of marriage as the union of only a man and woman. They also voted against retaining LGBTI inclusion in Taiwan’s school curriculum.

Homophobic groups put three referendum motions on the ballot. These motions aimed to restrict equal rights to marry for same-sex couples under the Civil Code and to ban LGBTI rights education in schools.

“This result is a bitter blow and a step backwards for human rights in Taiwan,” said Annie Huang, Amnesty International Taiwan’s Acting Director. “However, despite this setback, we remain confident that love and equality will ultimately prevail.”

The polls, however, are advisory referenda and are not binding. In May last year, the country’s top court, the Council of Grand Justices, said in a landmark ruling that the government had two years to change the law to enact marriage equality. This would make Taiwan the first nation in Asia to legalise same-sex marriage.

The government agreed to abide by the ruling but there are fears that the results of Saturday’s referenda could see it attempt to introduce some kind of watered down legislation without full marriage equality. It could also look at introducing separate legislation for same-sex unions or marriages, without amending the existing Civil Code.

Activists have claimed that the campaign against marriage equality in Taiwan was funded and supported by conservative American ‘pro-family’ groups.

“The result must not be used as an excuse to further undermine the rights of LGBTI people,” said Huang. “The Taiwanese government needs to step up and take all necessary measures to deliver equality and dignity for all, regardless of who people love.”

In a statement, the pro-LGBTI Taiwanese group, Marriage Equality Coalition, said it was “deeply saddened and disappointed” by the referendum results.

It added: “The referendum results showed that the majority of the public were misled by the fake information disseminated by the anti-LGBTQ alliance, which caused serious misunderstanding towards the current LGBTQ education.”