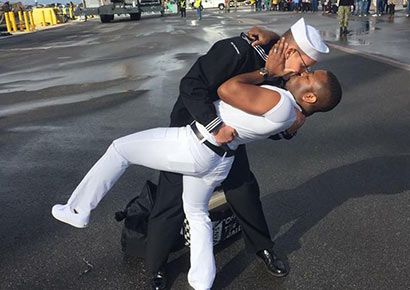 A gay sailor and his husband, who recreated the famous World War II homecoming kiss photograph, have been met with a wave of homophobia.

US seaman Bryan Woodington, 33, who had been stationed overseas aboard the USS The Sullivans for seven months, won a raffle for the ceremonial first kiss ahead of his return home to Florida for Christmas.

The kiss is a longstanding naval tradition and was most famously captured in the photograph by Alfred Eisenstaedt which portrays a US Navy sailor kissing a woman in New York City’s Times Square in 1945.

When Woodington and his around 300 shipmates arrived at the docks on 21 December, he was welcomed by his husband, 30-year-old teacher, Kenneth, who was dressed in white to match the woman in the iconic image.

Their smooch was captured by photographers and News 4 Jax, which broadcast the heartwarming moment. “It was a lot. I miss him very much, and it was our first deployment. And I’ve never been away from him that long. It just means so much to have him back,” an emotional Kenneth told the TV station. “I was excited and I could not wait for it to happen. I knew I was going to dip him,” said Bryan.

The footage of the lovebirds, however, was not well received by some viewers, with News 4 Jax bombarded by calls and emails from homophobic members of the public.

“How sad that your station has dropped to such a low as to show a gay couple kissing on your newscast,” wrote one viewer. Some even said that they’d boycott the station.

“How many people are now trying to explain to [their] young kids why 2 men were kissing. very disgusting. An ex [viewer],” stated another bigot. 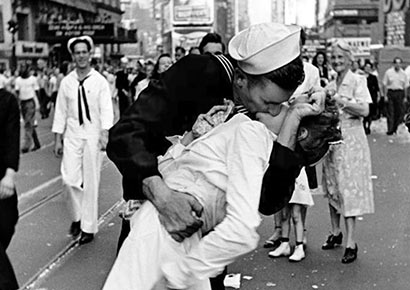 The 1945 photo by Alfred Eisenstaedt

The couple are not phased by the hate. “There are people who see the beauty in it. As for those who don’t, have a nice day,” Kenneth told Yahoo Lifestyle.

He added: “We’re showing our love for each other — we’re not hurting anyone. I’m just a spouse waiting for his sailor.”

It’s not the first same-sex “homecoming” kiss for the US Navy. In 2011, lesbian couple Citlalic Snell and Marissa Gaeta had the honour, as did gay couple Thomas Sawicki and Shawn Brier in 2015.