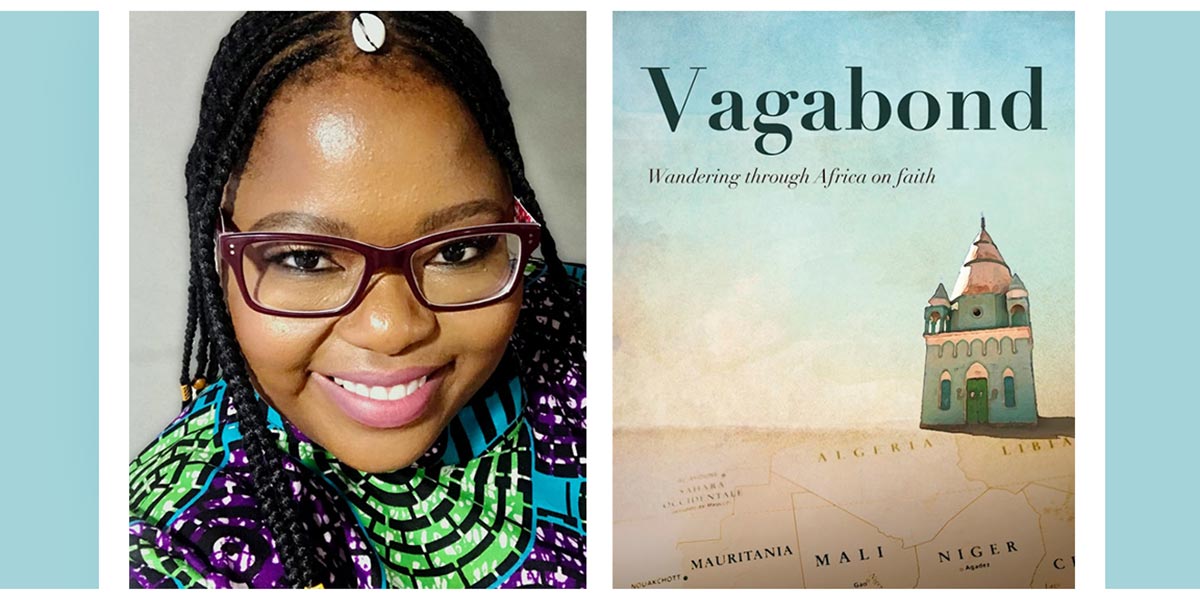 While many take an interest in writing about other people’s “life-threatening” journeys and narratives, some choose to document their own lives and tell their own stories. This includes Lerato Mogoatlhe, a travel writer who embarked on an adventure of her wildest dreams; journeying through 21 African countries. The trip was meant to be three months long but turned into a five-year experience.

Her book, Vagabond: Wandering Through Africa On Faith, is a travel memoir driven by the belief that whatever else Africa is, it is first and foremost her home. It is punctuated with a deep urge to know the continent differently. However, during her journey, Mogoatlhe encountered many challenges, such as a man forcing himself onto her and confronting homophobia in Uganda (which a great deal of the book talks about).

MambaOnline spoke to Mogoatlhe to find out more about her remarkable encounter with notorious Ugandan MP David Bahati on his bill to kill or imprison LGBTIQ+ Ugandans and almost being arrested for attending a Pride event.

What is the meaning behind the title of your book?

Vagabond means to drift or wander from place to place without any sense of direction and usually has negative connotations. But to me, it represents freedom, adventure and one of my biggest dreams – travelling Africa – coming to pass. I chose it because it’s a very visual name and because of what it represents in my life. Vagabonding doesn’t necessarily mean living without direction or purpose, certainly to me. It means living a life that goes far beyond the norm. In my life, it represents journeys I went on to use my voice and platforms as a journalist to tell African stories beyond stereotypes of doom and gloom.

Tell us more about the book?

I was working as an entertainment journalist at City Press in 2008 when I decided that the time had come for me to live my dream of travelling around Africa. I planned on being away to West Africa for three months and ended up living as a vagabond for five years. I stopped living on the road in 2013 but I still travel a lot and always to rewrite African narratives beyond doom and gloom.

Vagabond spans 21 countries in all five regions of Africa. It covers everything; living in Timbuktu, being in Salif Keita’s entourage, rafting the Nile, sexy flings, dark moments – like when someone removed the condom while we were shagging – once in a lifetime experiences like meeting and befriending my favourite artist, Habib Koite, in the Sahara desert, hanging out with the Taarab legend and one of my icons, Bi Kidude, in Zanzibar and watching the opening game of the 2010 soccer World Cup with her.

What inspired you to travel?

Gosh! I am tearing up as I say this. I have always wanted to travel to Africa. When I was eight or nine, it was because I was transfixed by The Sphinx and ancient Egypt and vowed to one day know ancient Africa. When I was 13, I became hooked on African literature and devoured the African Writers Series throughout my teens. This also started an obsession with African music and food, and our culture… By the time I hit my 20s, I was positively obsessed with Africa, which has always been more than my home. It’s my worldview; the art, music, food, my fashion, my beauty standard and culture I consume. It’s what I read, what I fantasise about, what I travel, how I engage with the world and how I relate to the world.

So these journeys around the continent are essentially my heartbeat. That’s why I am so emotional right now, recalling all the wonderful experiences and memories of my life around Africa. I did not expect that life would be this rich, this magical and the experience as affirming and as powerful as it is.

Part of your book includes confronting Ugandan MP David Bahati over his anti-LGBTIQ+ bill. How did this come about?

So, I was watching CNN or Al Jazeera when I saw that a Ugandan newspaper was making news for all the wrong reasons. They had a series of exposés called ‘Hang Them’ that reiterated David Bahati’s proposed bill to kill or imprison LGBTIQ+ Ugandans. Now, if there is one thing I have zero tolerance for, it’s denying people human rights; be they women, girls, children or LGBTIQ+ people. The only people whose humanity is lost on me are war-mongers, racists, rapists, murderers, bigots and others who dehumanise people.

So that report angered me. I had no option but to get on a bus to Kampala (from Lusaka) to challenge Bahati, interview the editor of Rolling Stone newspaper [not related to the American music and culture magazine] and most importantly, speak to members of the LGBTIQ+ community in Uganda to affirm that they are not alone and that I, for one, would not stand on the sidelines and shake my head. We need to stop writing our history with blood. It’s time to silence the guns, it’s time to end bigotry and hate. It is time that we, the people, stop being pawns in ‘Big Men’s’ power struggles.

Did you not fear that this encounter would result in you possibly being arrested?

I interviewed Bahati in his office and things got heated pretty quickly on my part. I lost my cool and journalistic objectivity – I am a human before I am a profession. I was never scared, not even for a second. Very few things scare me and people are not on the list. Africa doesn’t always stand together and with LGBTIQ+ experiences, especially back then. The South African media commented from the sidelines and newsrooms instead of being on-the-ground. Homophobia is not fought with just words, tweets and op-eds.

You were almost jailed after attending a Pride event.

My first visit to Uganda was in 2010. I kept my relationships and friendships alive and found out at the beginning of 2012 that something big was going to happen between July and August. My friend only said I wouldn’t want to miss the event, which turned out to be the first ever Pride Uganda. It was a four-day event with various activities like a film festival, fashion show, afterparties and so on. The main event was a parade at Entebbe Botanical Gardens. Several of us were arrested. Police alleged that we were staging and attending a gay wedding.

How did you respond to this?

I caused the biggest scene of my life. We were getting booked and never made it to the cells. I refused to give the police my name and surname, I talked-back, made sarcastic comments; anything to annoy [them]. And the trap worked because one of the female officers got physical. She pushed me. There was blood – the tiniest bit ever – but boy did I milk it! I cried. Men hate it when women cry, they don’t know what to do with tears. (This is a generalisation that only applies to my experiences with police and border officials). Before long, one of them begged me to go outside and said I was no longer being arrested. If there is one thing I adore about Africa, it’s that we are fluent in theatrics!

Africa is said to have some of the most ‘not so progressive laws’ in the world, including those that punish the LGBTIQ+ community. Looking at the adventure you went through, would you do it again?

Of course, I’d do it again. Africa doesn’t have backward laws — the world does. We are not the only place that’s homophobic. In South Africa, LGBTIQ+ people could marry long before America and some Western countries could even think about passing marriage equality laws… In some states in America, child marriage is permitted and abortion (a necessary reproductive right) is outlawed, so backwards and hateful laws are not unique to Africa; they are a global experience. Therefore, there is no law in Africa that will ever stop me from travelling our continent. I will never stop travelling in Africa, and I will never boycott any country because of their laws. In South Africa, we have a constitution but an incredibly long list of hate crimes against LGBTIQ+ people, yet I am living here instead of relocating to another continent.

Vagabond: Wandering Through Africa On Faith is available at Exclusive Books nationally and on Amazon.