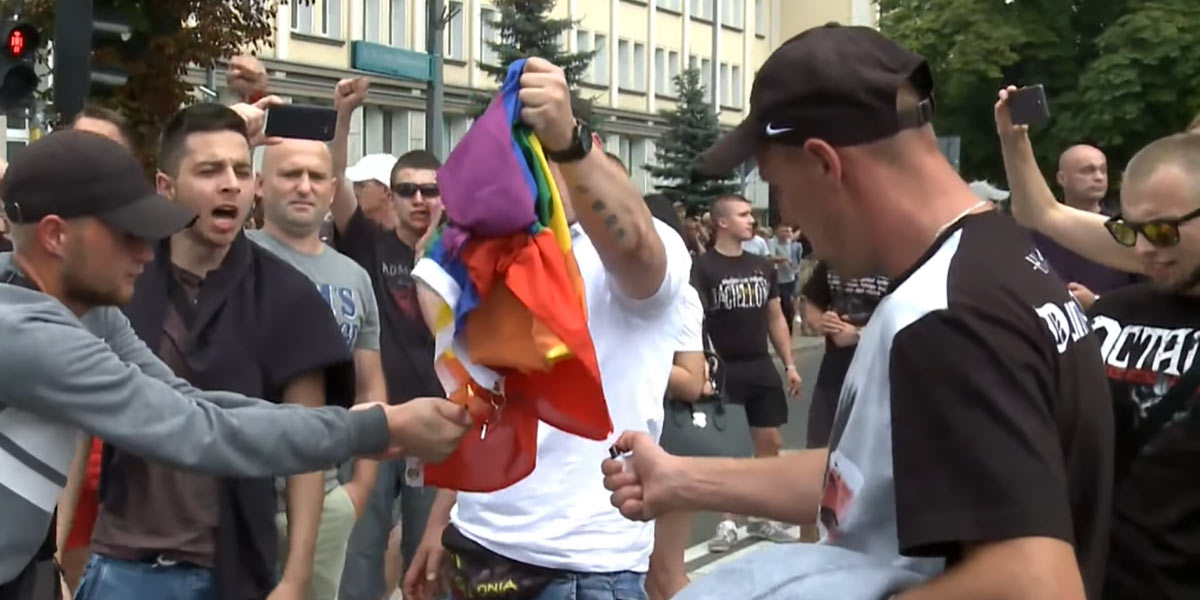 Twenty-five-people have been arrested after right-wing radicals attacked the first Bialystok Pride in Eastern Poland.

According to reports, around 1,000 members of the LGBTQ community and allies waving rainbow flags gathered peacefully in the city centre on Saturday to call for LGBTQ equality.

They were surrounded by police in riot gear who sought to protect them from violence from around 4,000 anti-gay protesters, including right-wing groups and nationalist football fans.

Despite the security measures, Pride participants were pelted with rocks, glass bottles and flash bombs. They also faced verbal abuse from the bigots who called them perverts and paedophiles and shouted out “God, honour and motherland.”

Video footage posted online saw police running after demonstrators as smoke bombs exploded. Officers held down and arrested some of the hooligans as a police helicopter hovered ahead. The demonstrators also burned rainbow flags in the street.

“There was no and there is no permission for hooligan behaviour that harms the rights of others,” she tweeted. “Any person who commits to breaking the law or hinders the execution of tasks by the police officers must take into account the consequences. The police will always react strongly to manifestations of such behaviour.”

While LGBTQ people have some protection from discrimination in Poland, the predominantly Catholic country remains a conservative one. Same-sex relationships are not legally recognised and same-sex couples cannot adopt children.

Poland’s ruling right-wing party, Law and Justice, has been accused of increasingly marginalising LGBTQ people. Its leader, Jaroslaw Kaczynski, has described efforts to support LGBTQ inclusion as “an attack on the family” and a foreign “threat to Polish identity, to our nation, to its existence and thus to the Polish state.”

Party officials also have launched disturbing campaigns to keep cities and regions ­“LGBT-ideology free.” The weekly newspaper, Gazeta Polska, recently announced it would include “LGBT-free zone” stickers with copies of its publication.

Last year, the crowning of Mr Gay Europe and the Poznan Pride celebrations were also marred by anti-LGBTQ protests. A February 2014 opinion poll found that 70% of Poles believe that same-sex sexual activity “is morally unacceptable”.