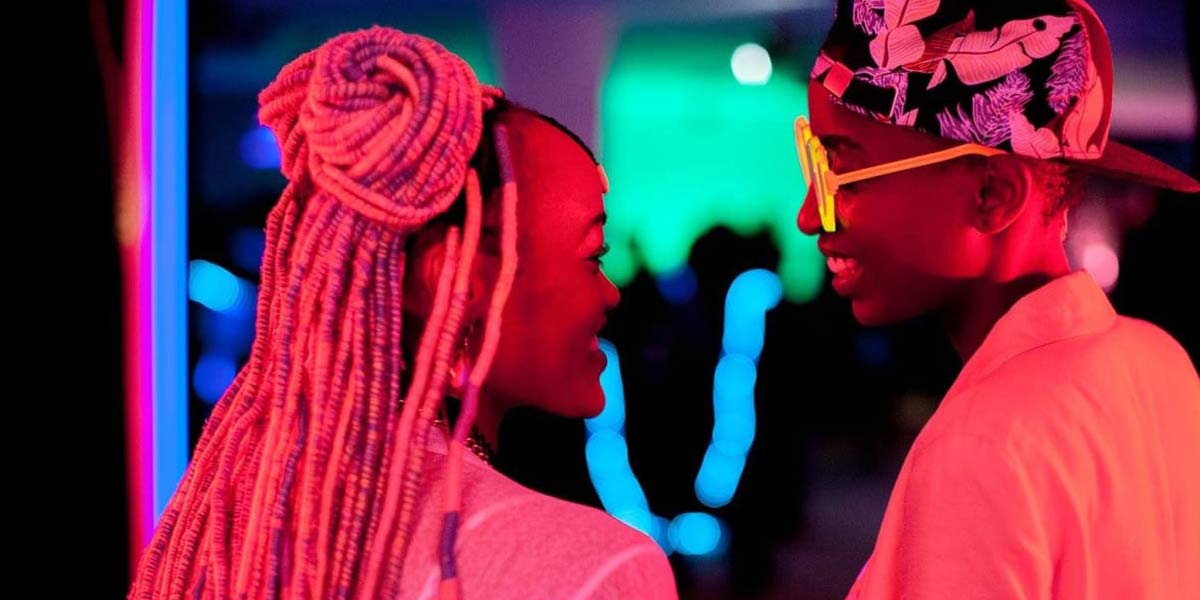 They support one another to pursue their wildest dreams in their conservative society, and amid family and political pressures. As both young women make do with the hand life has dealt them, they discover passion in their shared struggle. It’s a colourful story that pulsates with the rhythm of first love.

Like the best lesbian films, Rafiki pays homage to the traditions of queer cinema in all of its glory, featuring strong women with agency in their own lives, as well as high entertainment value, and bold visuals.

“We’ve seen the integration of lesbians in all types of mainstream media such as film, prime-time television shows and Internet-based web series,” says Helen Kuun, MD of Indigenous Film Distribution, which is distributing the film in South Africa.

“There’s been a welcome evolution in the representation of lesbians on screen. Consider Charlize Theron as the degenerate Aileen Wuornos in 2003’s Monster, versus her ball-busting feminist icon Lorraine Broughton in 2017’s Atomic Blonde. Rafiki is part of that new wave of lesbian cinema featuring powerful characters who make their own choices.”

The film had its world premiere in the Un Certain Regard section at the 2018 Cannes Film Festival as part of the official selection. It has screened at over 150 film festivals worldwide and has won more than 20 awards.

It’s an important and brave film, coming from a country that recently upheld a law banning gay sex, keeping same-sex relations punishable by up to 14 years in jail, and drawing strong criticism from the celebrities and activists around the world.

Rafiki was banned from cinemas in Kenya by the Kenya Film Classification Board (KFCB) for “promoting” same-sex relationships. Being banned from screening in its home country meant that it could not be submitted for Oscar consideration in the Best Foreign Language Film category, as the Academy requires that all submissions be screened for at least seven days in their countries of origin.

Writer-director Kahiu with a group of artists launched a lawsuit against the government claiming damages; the high court agreed to temporarily lift the ban for seven days to allow Kahiu to meet the requirements for submission. Rafiki made $33 000 in gross earnings, in that week of release, making it the second-highest-grossing Kenyan film of all time.

More than 6 500 people flocked to cinemas in Kenya and hundreds were turned away with theatres reaching full capacity. The film has also been released in cinemas across Europe, North America, Brazil and upcoming in Japan. Kahiu and the group of artists continue to sue the government to have the film permanently unbanned.

Rafiki is produced by South African Steven Markovitz, who has been producing fiction and documentaries for more than 20 years in countries throughout Africa.