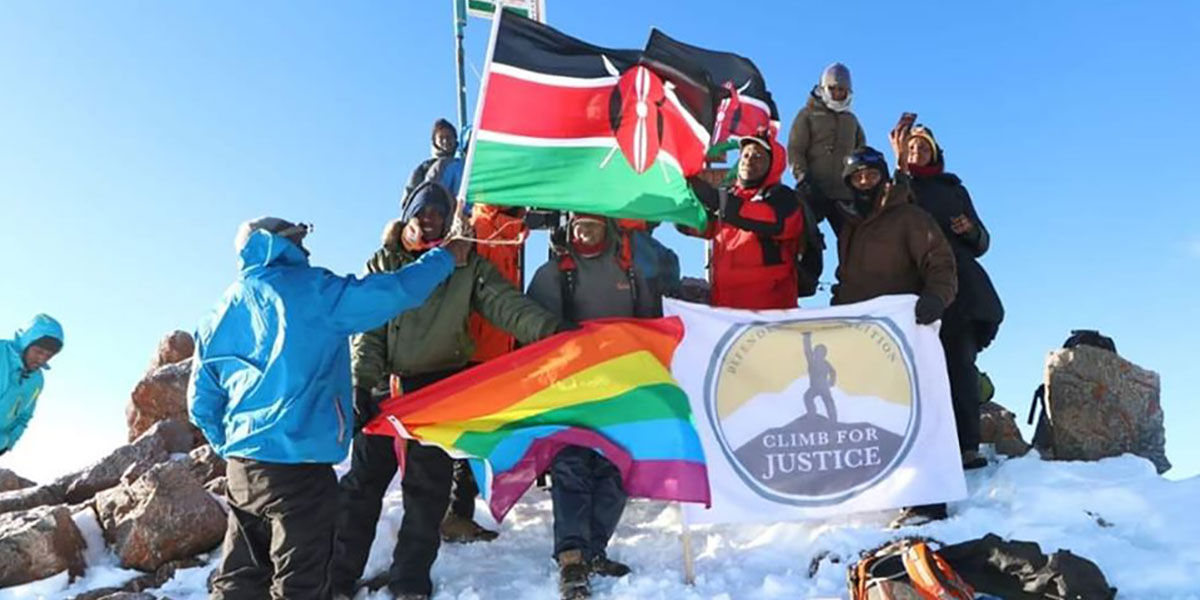 Recently, Kenyans on Twitter went on attack mode in response to a photo of the rainbow flag being hoisted, together with the Kenyan flag, on top of Mt Kenya.

The hoisting, part of the #ClimbforJustice campaign by the Defenders Coalition of Kenya, aimed to raise funds for much-needed support for human rights defenders in Kenya, including LGBTIQ ones.

The reaction from Kenyans – ridicule, fear, hate – were really inappropriate. Why would a simple rainbow flag elicit so much hate? To better help us understand, perhaps a bit of history.

According to Genesis 9:13-17, after the Great Flood, God put the rainbow in the sky as the sign of His promise that He would never again destroy the earth with floods.

The rainbow, then, became a symbol for God’s promise. An everlasting promise. A covenant. Between us and God, the maker of the universe. Further on, the rainbow is mentioned in the Bible seven times, often as a symbol of God’s glory, love and patience.

The rainbow flag – a symbol of peace

In modern times, the use of the rainbow colours in flags has become synonymous with the call for universal peace in the world. The rainbow has also been used as a sign of a new era, of hope, or of social change. Universally used in the Arts, music, literature, music and religious beliefs, the rainbow colours are generally described as welcoming, colourful and peaceful.

There is another meaning to the rainbow flag and which seems to irk most Kenyans – that the rainbow flag is a symbol of the gay movement. In 1978, an openly gay artist, Gilbert Baker, taking inspiration from Harvey Milk, one of the first openly gay elected officials in the US – later assassinated – designed the first rainbow flag. He said he chose to use flags as flag were the most powerful symbols of pride.

“Our job as gay people was to come out, to be visible, to live in the truth, as I say, to get out of the lie. A flag really fit that mission, because that’s a way of proclaiming your visibility or saying, ‘This is who I am!’”

Baker saw the rainbow as a natural flag from the sky, so he adopted eight colours for the stripes, each colour with its own meaning (hot pink for sex, red for life, orange for healing, yellow for sunlight, green for nature, turquoise for art, indigo for harmony, and violet for spirit). However, this initial version underwent various changes – the pink and turquoise stripes were removed and indigo was replaced by basic blue, which resulted in the contemporary six-striped flag (red, orange, yellow, green, blue, and violet).

Today this is the most common variant of the rainbow flag, with the red stripe on top, as in a natural rainbow. The various colours then came to reflect both the immense diversity and the unity of the LGBTQ community. Since 1994, the rainbow flag was truly established as the symbol for LGBTQ pride.

Hoisting flags for mountaineers and hikers became a global phenomenon to celebrate reaching summits or a sign of pride, and nationalism. So, it’s no wonder that most mountain climbers would carry their country’s flag and hoist them after conquering the audios climbs. You would be able to see multiple country flags in most iconic mountains such as Mt Kilimanjaro, Everest, Kenya, among others.

This is no different when the Defenders Coalition Kenya, through their #ClimbForJustice initiative. The campaign aims to raise KShs 50 Million to establish a vibrant space for human rights defenders in Kenya. As part of this, they organised a mountain climb to Point Lenana, Mt. Kenya. There, the Kenyan flag and the rainbow flag were hoisted next to each other. 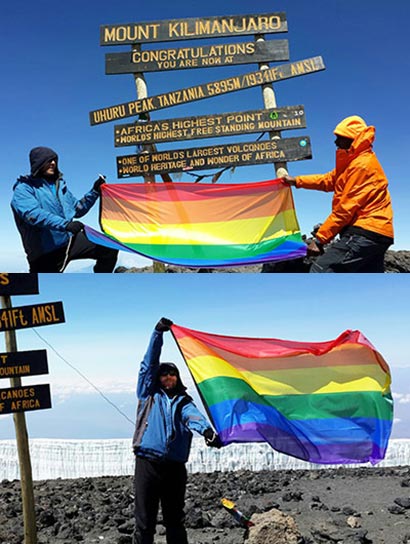 In 2015, South African Herbie Aucamp reached the summit of Mt Kilimanjaro in Tanzania to raise the rainbow flag.

Crude data from my self sponsored project, “Waiter, umenyonga ugali (you are serving small portions): LGBTI rights and Human Rights”, where I attempt to answer the question, ‘Are LGBTIQ rights part of the Kenya civil society menu?’ shows that most CSOs and HRD organisations are paying lip service when it comes to LGBTQ rights.

Most are receiving obnoxious amounts of funds to promote equality and respect for queer rights, but are afraid of the public perception and intrusion they may face from authorities. They have no qualms shouting and publicising about their other efforts but mention of LGBTQ rights receives a tasteless blog piece tucked at the end of their website.

In my project, I investigate how – if at all – civil society’s organisations in Kenya are integrating the rights of sexual and gender minorities in their advocacy strategies, and social change programs? For this, I am working with various LGBTI groups in Nairobi, and mainstream civil society organisations.

By deleting the photo, it seems I already have my answer. Waiter, ananyonga ugali (you really are serving small portions)!