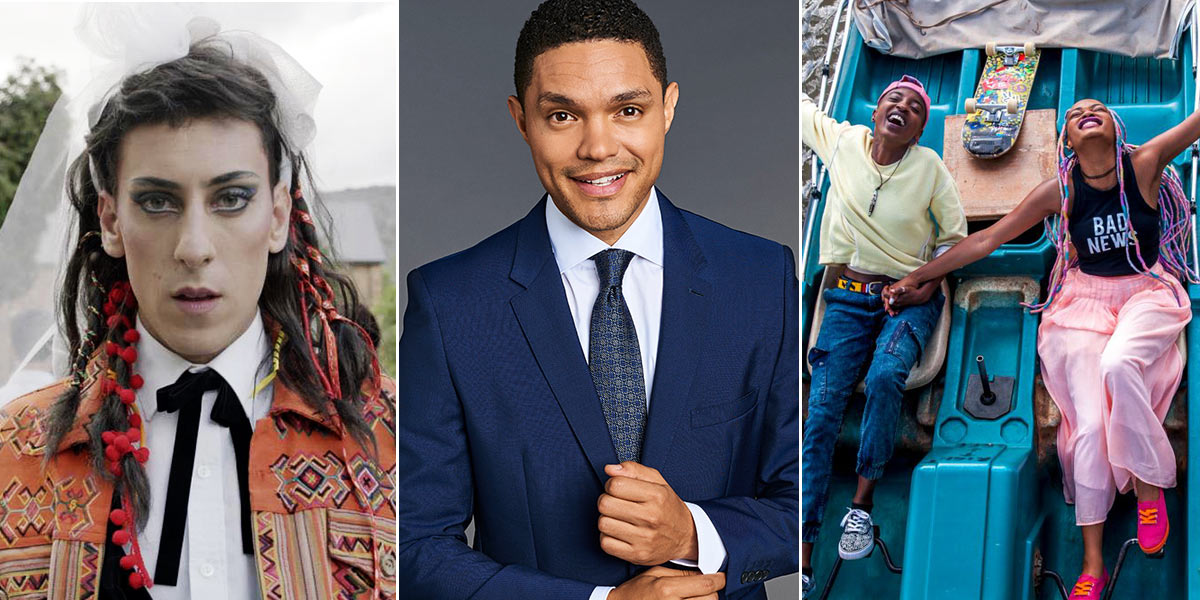 Trevor Noah, South Africa’s Kanarie and Kenya’s Rafiki, along with movies like Judy and Rocketman, are among the diverse nominees for the 31st Annual GLAAD Media Awards.

There are a whopping 176 nominees in 30 categories which this year feature 10 nominees in the Outstanding Kids & Family Programming category as “a result of an increase in LGBTQ images across… kids and family television programming.”

The South African-born Noah has been nominated in the category of Outstanding Variety or Talk Show Episode for his interview with Jacob Tobia, a genderqueer LGBTQ rights activist, writer, producer, television host and actor.

The award-winning gay-themed Afrikaans film Kanarie has been nominated for Outstanding Film – Limited Release, as has lesbian love story Rafiki from Kenya.

Kanarie (Canary) is a gay musical drama set in apartheid South Africa during the 1980s. It tells the story of an 18-year-old boy who is recruited into the Defence Force Choir. Rafiki, which remains banned in its home country of Kenya, is a coming of age tale about two Kenyan girls who fall in love and whose desire for each other flies in the face of African conventions.

The vast nominees’ list also features television shows such as Pose, Schitt’s Creek, The Politician, Euphoria and Watchmen and films including Downton Abbey, Judy and Rocketman, all of which highlight LGBTQ characters or storylines.

“There are more nominees for the 31st Annual GLAAD Media Awards than ever before not only because LGBTQ diversity and inclusion has progressed, but because GLAAD’s work to forward LGBTQ visibility has never been more important,” said Sarah Kate Ellis, GLAAD President & CEO.

This year’s nominees include powerful and impactful stories about LGBTQ people of colour, including Euphoria, Killing Eve, The L Word: Generation Q, Pose, Brooklyn Nine-Nine, Dear White People, One Day at a Time, Superstore, Vida, and Tales of the City.

For the first time since the 24th Annual GLAAD Media Awards, GLAAD will honour LGBTQ-inclusive content on Broadway to celebrate the increase of LGBTQ storytelling in theatre. The nominees for Outstanding Broadway Production include Choir Boy, The Inheritance, Jagged Little Pill, Slave Play, and What the Constitution Means to Me.

The GLAAD Media Awards ceremonies will be held across two events: In New York at the Hilton Midtown on Thursday, March 19, 2020 and Los Angeles at the Beverly Hilton on Thursday, April 16, 2020.

End of the Century (The Cinema Guild)

Portrait of a Lady on Fire (NEON)

This Is Not Berlin (Samuel Goldwyn Films)

One Day at a Time (Netflix)

The Other Two (Comedy Central)

Outstanding Individual Episode (in a series without a regular LGBTQ character)

“This Extraordinary Being” Watchmen (HBO)

Tales of the City (Netflix)

When They See Us (Netflix)

“Mr. Ratburn and the Special Someone” Arthur (PBS)

She-Ra and the Princesses of Power (Netflix)

Adam Lambert, Velvet: Side A (More is More/Empire)

Tegan and Sara, Hey, I’m Just Like You (Sire)

Laura Dean Keeps Breaking Up With Me, written by Mariko Tamaki (First Second)

The Inheritance, by Matthew Lopez

What the Constitution Means to Me, by Heidi Schreck

“Jonathan Van Ness: Honey, She’s An Onion With All Sorts of Layers” The Late Show with Stephen Colbert (CBS)