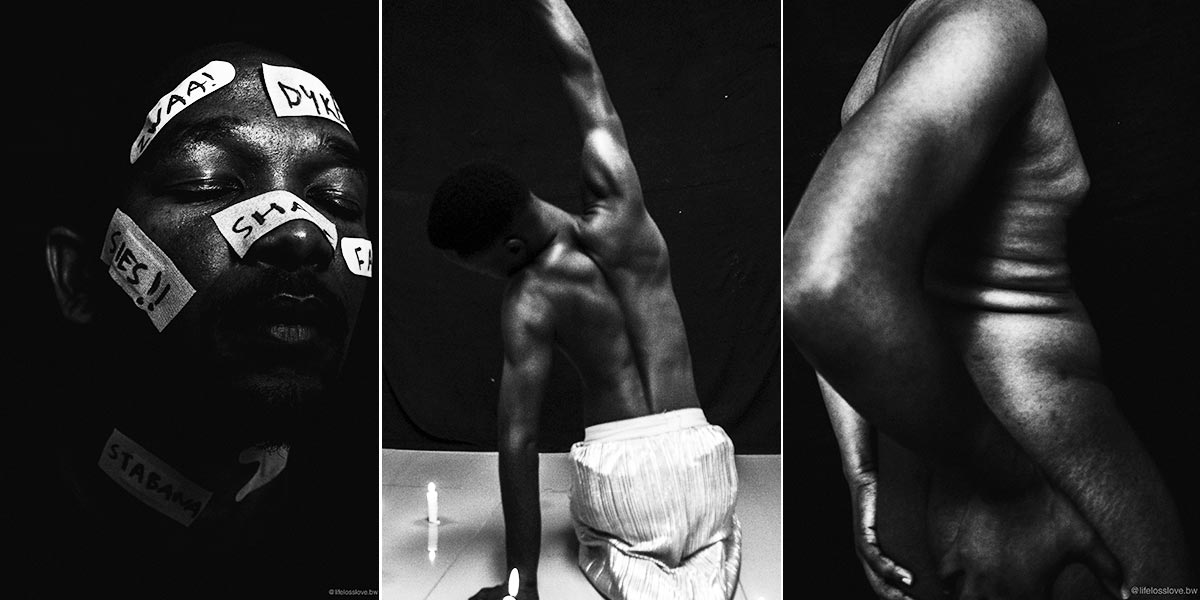 A striking new digital photography project is exploring queer experiences in Botswana and highlighting intersections with other social justice movements.

The project is the brainchild of LGBTIQ activist Bradley Fortuin, is photographed by Lame Dilotsotlhe and aims to raise public awareness of LGBTIQ people in Botswana by collecting their stories through photography.

“The project was something that I have been thinking about since 2018. And I eventually drafted a concept. I also looked for funding for it and got funding from The Other Foundation to kick start it,” Fortuin says.

Fortuin is one of the project’s first subjects and the images he appears in reflect aspects of his own journey: “From being sexually assaulted as a child by a family friend for being ‘too girly’ and feminine, to being told that my being gay was punished by God through the death of my mother.”

When asked why he chose photography as a medium for the initiative, he responds that “pictures have great power and potential to make change, to spark conversations and envoke progressive thought.”

The moody, largely black and white images that are being rolled out on Instagram feature five members of the LGBTIQ community. They took part in support group meetings where experiences were shared, which in turn influenced the direction of the project and its themes.

“I still struggle with unlearning the religious beliefs I was taught”

Dilotsotlhe says he aimed to create thought-provoking photos that “capture the true essence of diverse individuals from the LGBTIQ+ community in Botswana in their most vulnerable, purest form in an effort to create a conversation around issues of gender, sexuality, identity and religion.”

The creators are well aware that the subjects could face further discrimination or abuse just by taking part in the project, which is why they’re not identifiable in the images. Fortuin explains that even though the Botswana High Court decriminalised homosexuality in June last year, stigma and discrimination towards LGBTIQ individuals is still a very real problem.

“This affects every aspect of the daily life of LGBTIQ people; at the family level, school and work environments, personal relationships, faith and spirituality. LGBTIQ people often have to hide their true identity, thoughts and feelings just to survive and fit in.”

He also notes that “sexual and gender minorities in Botswana still experience unjust treatment, harassment, rape and other physical assaults.”

Dilotsotlhe admits that as the photographer he had some reservations about participating in the Life | Loss | Love project:

“I’m a pastor’s kid who grew up in a strict Christian home. I still struggle with unlearning the religious beliefs I was taught, so leading a photoshoot that questioned all those beliefs made me very anxious and I was kind of worried about what people would say if the photos went public with my initials on it – or even if my parents saw it.”

So far, the response to the project has been positive, especially from the queer community.

“It’s on Instagram only right now, but I’m also in the process of creating a website for it,” says Fortuin. “We’re looking for funding to have public exhibitions across the country and beyond, have community engagements and more awareness-raising.”

He continues: “I really believe in this project, the amount of impact that it has in promoting diversity, connecting Batswana and ensuring that we have a repository of queer content that will help in whatever way possible.”

Fortuin adds: “There’s a Setswana saying “motho ke motho ka batho” [we live to co-exist] and this is what Life | Loss | Love is about; integration of diversity into Botswana society.”

You can view the Life | Loss | Love project on Instagram here.

"The complexities of religion, faith, sexuality and gender identity is experienced by all including LGBTIQ individuals and womxn, which has resulted in many forms of inequality, injustice within our communities" #LifeLossLoveBW 📸: @lamedilotsotlhe