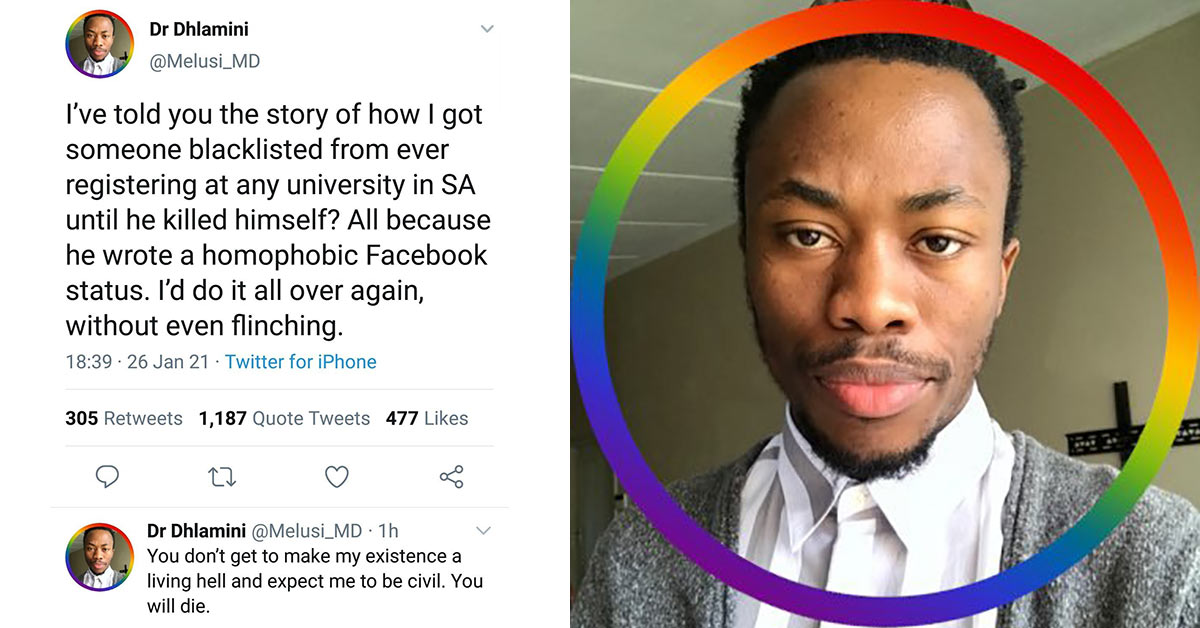 A colossal Twitter furore erupted on Tuesday after medical doctor Melusi Dhlamini said he was unrepentant about “blacklisting” a homophobe, which apparently caused the man to commit suicide.

Dr Dhlamini’s incendiary tweet was posted as the social media platform was already in the midst of a furious battle between queer twitter and homophobes over the still-fresh MacG podcast controversy.

“I’ve told you the story of how I got someone blacklisted from ever registering at any university in SA until he killed himself? All because he wrote a homophobic Facebook status. I’d do it all over again, without even flinching,” said Dhlamini.

He went on to add: “You don’t get to make my existence a living hell and expect me to be civil. You will die.”

With almost 20,000 followers, Dhlamini is Director of Clinical Services at Marie Stopes South Africa and was one of the Mail & Guardian’s 200 Young South Africans in 2020.

His tweet quickly went viral, with Twitter venting its collective anger at the doctor amid calls for him to be fired and for the Health Professions Council and the Department of Health to intervene. The hashtags #DrDhlaminiMustFall and #DrDhlaminiMelusiMustFall were soon trending.

Many questioned how a doctor whose ultimate responsibly is the care of others could so callously and unethically dismiss (if not boast about) a person’s suicide, regardless of what the individual had posted on Facebook.

The issue also divided the LGBTQ community itself, many of whom agreed that Dhlamini had gone too far with his tweet. He was criticised for causing the MacG issue to fall off the radar and effectively diverting the conversation away from the real topic of queerphobia.

LGBTQ publicist Yaya Mavundla tweeted that while she agreed that the tweet was ill-considered, “I understand what triggered those emotions. LGBTIQ+ people die in the hands of Queerphobes! Especially men! It NEEDS to STOP TODAY!”

Dhlamini’s Twitter account has since been deleted or suspended. In a statement posted on Wednesday afternoon, Marie Stopes SA said it was “aware of recent comments made by one of our employees on social media.” The sexual and reproductive healthcare organisation revealed that “the employee has been suspended pending the outcome of an internal investigation.”

Meanwhile, neither MacG nor Sol Phenduka has publicly addressed the anger sparked by their transphobic comments on the Podcast and Chill YouTube show. Their bigotry led to Old Mutual terminating its relationship with MacG.

@Melusi_MD where do you practice ? Surely you are an unstable human with questionable ethics and the @HealthZA should look into your conduct and mental wellness before you are allowed near anyone!!!

*those who have it, please attach now deleted tweet to give context

This is just so cold-hearted and callous from a @HPCSA_ practitioner and one of the @mailandguardian top 200 influential young persons #DrDhlaminiMustFall pic.twitter.com/9xMB874EFY

When I read this tweet last night I was deeply troubled especially as a medical professional #DrDhlaminiMustFall
A thread pic.twitter.com/Maej9lKo1g

I hope Malusi Dr Dhlamini is fine wherever he is. He must have used very insensitive way to address the issues we are facing, very wrong but I understand what triggered those emotions. LGBTIQ+ people die in the hands of Queerphobes! Especially men! It NEEDS to STOP TODAY!