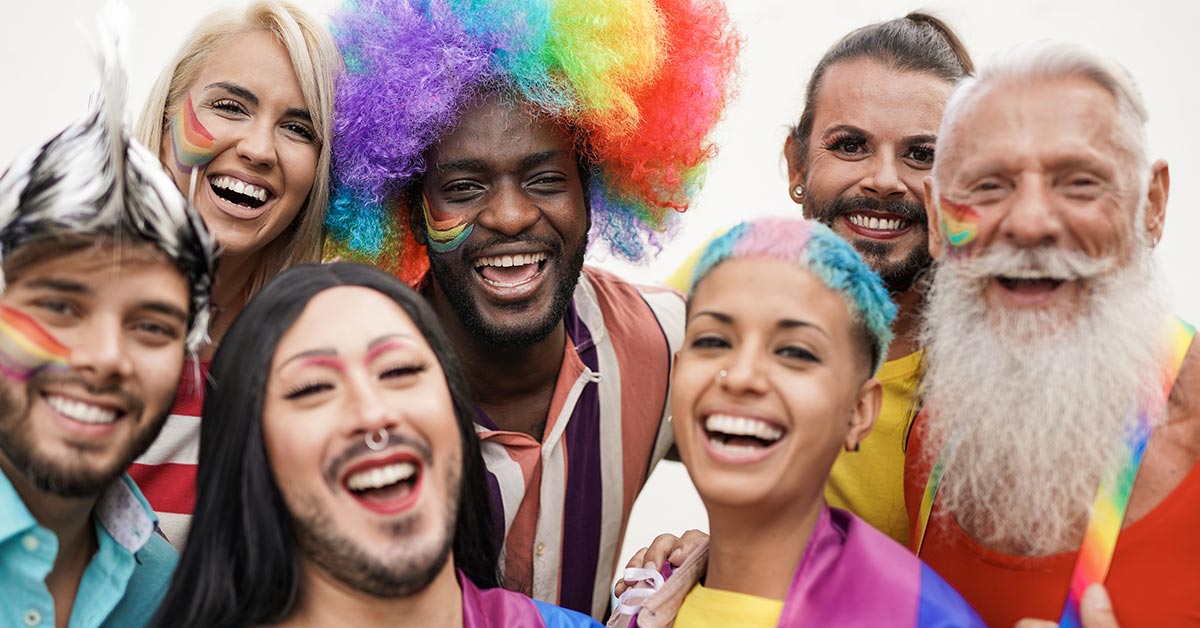 The way we use words is intrinsically intertwined with the way we see the world and relate to other people.

It is interesting to note how dramatically language linked to queer culture and identity has changed over the years, and especially over the past decade or two.

LGBTQI+ communities all over the world have taken back terms that were previously considered derogatory and in many instances, this reclamation has led to a great many terms becoming a part of the mainstream. With regards to trans and non-binary communities, the vocabulary that has become preferred amongst these groups has significantly expanded of late.

Delving into some of the terms related to trans and non-binary identities is crucial. While it’s almost certain that the language we use today is set to expand and evolve in the future, the basic glossary below gives us a good idea of what the generally appropriate words are to use in reference to the trans and non-binary community in 2021.

The internal sense that a person has of being female, male, both, or neither. This is different to sex, which is often used as a system for classifying and assigning a gender to a person when they are born, mostly based on the way their physical genitalia is perceived. While sex will determine whether a person is assigned male or female at birth, a person may later in life, as a result of their actual lived experience, realise that their gender is different to this initial classification. Gender should also not be confused with sexual orientation (gay, straight, bi etc.), which refers to who a person is attracted to.

A system which states that sex or gender can only be divided into two categories – male or female. Here sex or gender is seen as a fixed and unchangeable fact that leaves no room for genders or anatomies that don’t fit into the narrow boundaries that are defined by this binary. The binary system has fallen out of favour amongst many in our community as well as among gender and LGBTQI+ advocacy organisations, academics and health professionals as it is not accurate and marginalises entire groups, like intersex, trans and non-binary people.

This umbrella term is broadly used to refer to people whose gender identity or gender expression does not match the cultural association of the sex or gender they were assigned when they were born. For example, a trans man is someone who was assigned female at birth, but identifies as male. Some trans people undergo medical treatment and procedures to change their bodies to align with their gender identity, but this is not always the case. Some trans people identify with one of the gender binaries (male / female), while many others do not (non-binary).

Someone who is non-binary does not identify with any of the binary genders (male / man / boy or female / woman / girl). Various other gender identities exist within the non-binary community, such as:

Genderqueer: Someone who is genderqueer rejects binary genders and may not identify as male or as female (although some genderqueer people do prefer to identify within the gender binary as genderqueer men or women), rather seeing themselves somewhere in between or outside of traditional gender conventions.

Gender fluid or bigender: Someone who is gender fluid may shift between different gender presentations or genders at different times.

Agender or neutrois: An agender person who feels neutral in their gender, not identifying with the traditional binary, or as not having a known or definable gender at all.

Demiboy or demigirl: People with this gender identity only partially identify with a certain gender binary, regardless of what they were assigned at birth. For example, a demigirl may be someone who was assigned female at birth but doesn’t feel strongly connected to that gender, but it could also be someone who was assigned male at birth and associates more with a female gender identity, albeit not strongly enough to want to identify as a woman.

A cisgender individual identifies with the gender they were assigned at birth. For example, a cis man is a man who was assigned male at birth and also identifies as male in terms of his gender identity. Most people who are not part of the transgender community would likely be cisgender.

While the terms transgender or cisgender relate to a person’s gender identity (or sense of gender self), an intersex person is born with sex characteristics (including genitals, gonads and chromosome patterns) that do not fit typical binary notions of male or female bodies. Today we tend to see these as natural variations in the human body and not something to be “fixed”. An intersex person can identify as a cisgender or transgender woman or man, as gender-fluid, non-binary or any of the other gender identities.

A personal pronoun is a short word we use in place of someone’s name, and it is often associated with gender binaries, such as she, he, him or her. Transgender people often tell others what their preferred pronouns are upon initially meeting them. Today we do not only keep to the binaries: some non-binary people, for example, may prefer they instead of he. When Elliot Page came out as trans, they announced that his preferred pronouns were both he and they, as illustrated in this sentence. Pronouns, along with the name that they sometimes choose to replace the name they were given at birth (or their deadname), are very important to trans and non-binary people. When addressing a trans or non-binary person, try to always use their preferred pronouns.

This glossary is not comprehensive, and there are more gender identities and terms out there (Google is your friend). But even as our vocabulary develops and widens to be more inclusive of people whose gender identity has existed for centuries, words mean precious little if they don’t align with the way people are treated.

As members of the LGBTQI+ community, it is incumbent upon each of us to stand up for everyone that forms a part of our community – no matter what terms or identities they may embrace.