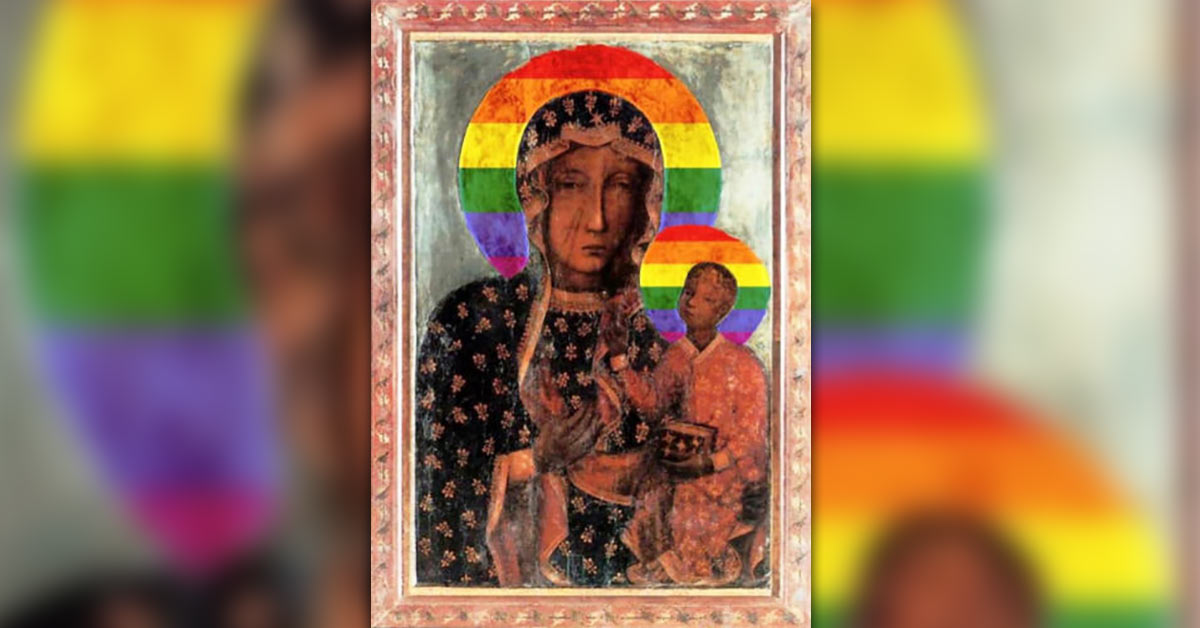 A judge in Poland said that a poster with the Virgin Mary and baby Jesus surrounded by the rainbow flag colours was not offensive.

The three women in Poland stood trial for distributing posters of the Virgin Mary and baby Jesus with a halo in the rainbow colours of the LGBT+ pride flag.

The authorities first arrested and detained Elżbieta in a raid on her apartment in 2019 and officially charged all of the three activists in July 2020.

The authorities alleged that they placed the posters on 29 April 2019 in public places in the city of Plock and “publicly insulted an object of religious worship in the form of this image which offended the religious feelings of others”.

The activists said that the posters aimed to highlight the ongoing hostility by the powerful Catholic Church in Poland against the LGBT community.

“Now that hate speech is concentrated on LGBT persons, we decided that it’s our duty to protect them. If the church, which is said to be full of love, attacks them, then somebody has to protect them,” Podlesna told DW.

On Tuesday, a court acquitted the three women, affirming that they were entitled to their freedom of expression. Judge Agnieszka Warchol further ruled that their intention was not to offend.

“The goal of the activists… was to show support to LGBT individuals, to fight for their equal rights,” said the judge.

Polish LGBT+ organisation Love Does Not Exclude welcomed the ruling as “a huge victory for the resistance of the LGBT+ movement and the left fighting for equality in Poland, the most homophobic country of the European Union.”

Amnesty International said the women had risked being jailed “simply for standing up for LGBTI rights in a climate of hate and discrimination in Poland.”

Catrinel Motoc, Senior Campaigner in Amnesty International’s Europe Regional Office, commented: “Targeting these activists with such absurd and unfounded charges is emblematic of, and unfortunately consistent with, a much wider pattern of harassment and intimidation of human rights activists all across Poland.”

“The acquittal of these brave human rights activists shows that the prosecution attempt was nothing more than an intimidation tactic from by Polish authorities. We urge them to stop using the criminal justice system to target and harass human rights defenders simply because of their activism.”

While the women have expressed their relief at their acquittal they noted that the prosecutor in the case intends to appeal the court’s decision.

In 2019, the Catholic Archbishop of Krakow, Marek Jedraszewski, warned that Poland was facing a ‘rainbow threat’. Last year, ILGA-Europe gave the country the lowest ranking in its 2020 European Rainbow Map report on LGBT equality.