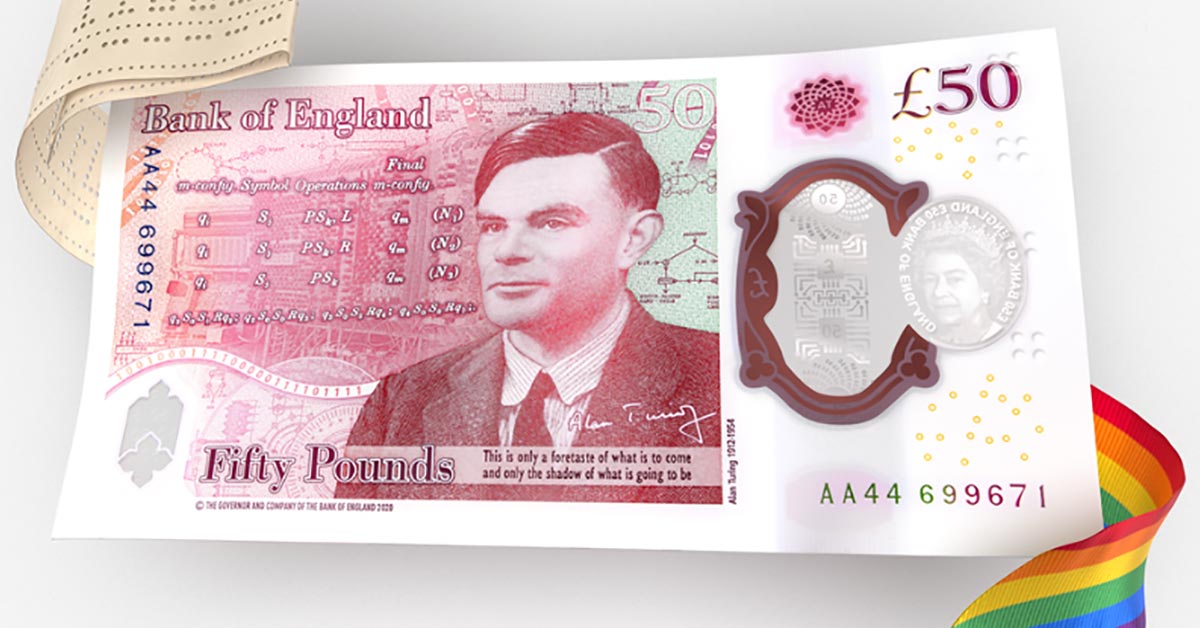 The Bank of England has revealed the design for what’s believed to be the first banknote to feature an LGBTQ person, the late gay scientist Alan Turing.

Turing (1912 – 1954) was prosecuted for homosexuality and was given the choice of imprisonment or chemical castration. He chose the latter and underwent forced oestrogen hormone injection treatment for a year before committing suicide from cyanide poisoning at the young age of 41.

“There’s something of the character of a nation in its money, and we are right to consider and celebrate the people on our banknotes. So I’m delighted that our new £50 features one of Britain’s most important scientists, Alan Turing,” commented Governor Andrew Bailey.

Turing is best known for his codebreaking work at Bletchley Park, which helped end the Second World War. He was a leading mathematician, developmental biologist, and a pioneer in the field of computer science.

“He was also gay, and was treated appallingly as a result. By placing him on our new polymer £50 banknote, we are celebrating his achievements, and the values he symbolises,” said Bailey.

Jeremy Fleming, Director of Government Communications Headquarters (GCHQ), added: “Alan Turing’s appearance on the £50 note is a landmark moment in our history. Not only is it a celebration of his scientific genius which helped to shorten the war and influence the technology we still use today, it also confirms his status as one of the most iconic LGBT+ figures in the world.

“Turing was embraced for his brilliance and persecuted for being gay. His legacy is a reminder of the value of embracing all aspects of diversity, but also the work we still need to do to become truly inclusive,” said Fleming.

In September 2009, British Prime Minister Gordon Brown issued a formal posthumous apology to Turing for his prosecution but the war hero’s conviction remained standing. In 2013, Turing was finally granted a posthumous royal pardon by the Queen, almost 60 years after his tragic suicide.

The new polymer £50, which was announced in 2019, will be issued for the first time on 23 June, which coincides with Turing’s birthday.