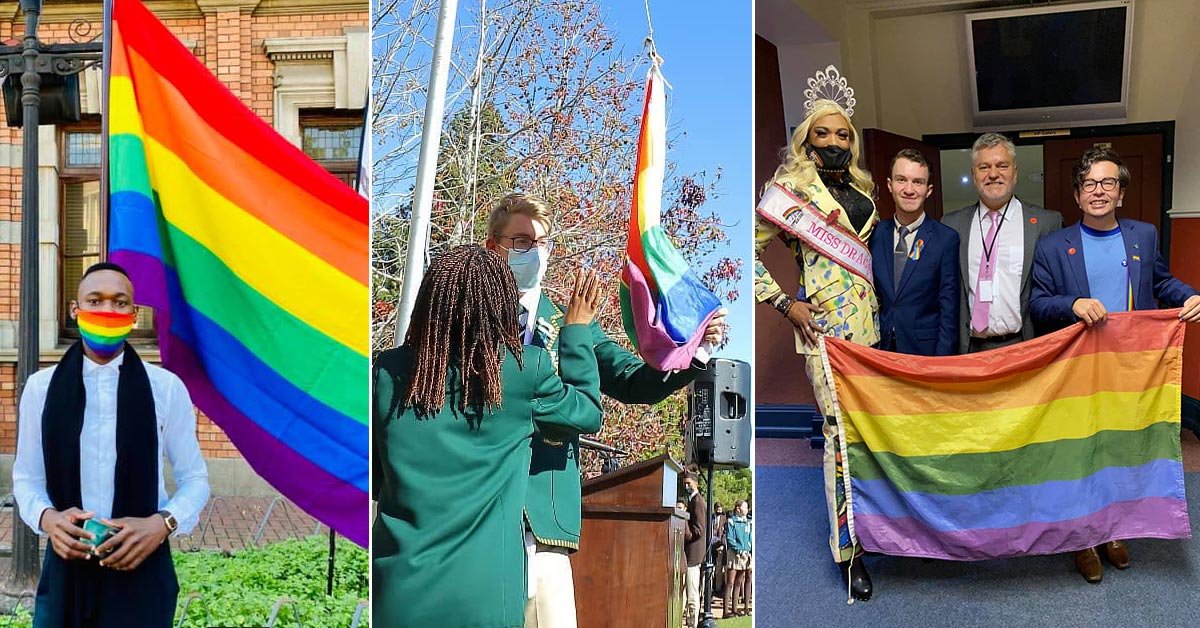 Pride Month 2021: The rainbow flag outside the KZN Legislature, at Fairmont High School and the Gauteng Provincial Legislature

More schools and organisations than ever before in South Africa have marked Pride Month by raising or displaying the rainbow flag, while the Gauteng Provincial Legislature has also agreed to fly the flag.

Earlier this month, MambaOnline reported that students at the prestigious St John’s College in Johannesburg would raise the Pride flag every Tuesday in June to “recognise, value and promote diversity…”

At least two other schools have followed suit. According to the Catholic school’s Facebook page, pupils at Sacred Heart College high in Johannesburg raised funds to buy and hoist a Pride flag “to symbolise the safe space within Sacred Heart College for the LGBTQ+ community and to encourage inclusion and conversations surrounding this community.”

In the Western Cape, Fairmont High School held a ceremony during break time, initiated by the Representative Council of Learners, for students and staff to celebrate Pride Month in which the flag was also raised.

“We’ve been planning this for a while. We are trying to include everyone in the school. We don’t want anyone to be marginalised. We want everyone to feel that they belong,” the school’s headmaster, Leon Erasmus, told SABC News.

The affirming gestures are in stark contrast to the incident at DF Malan High School in the Western Cape where LGBTIQ+ students were banned by the principal and the governing body from commemorating LGBTIQ+ Pride month because it would be “disruptive”.

The rainbow flag and LGBTQ+ affirming messaging have also been spotted at stores like H&M, malls like The Zone at Rosebank Mall and hanging outside the KwaZulu-Natal Museum and the KwaZulu-Nata Legislature in Pietermaritzburg. The City of Johannesburg also changed its official logo to a rainbow version on its social media accounts.

On Tuesday, the DA called on the Gauteng provincial government to fly the rainbow flag at the Legislature Building in Johannesburg.

“South Africa is a country renowned for one of the most liberal constitutions in the world. Despite this, we also live in a country where gay men, women and non-binary people are still being judged for who they love. Transgender people are still being victimised persecuted, beaten, or killed because of the way they best identify,” said DA MPL Nico De Jager in a speech at the legislature to mark International Pride Month.

“As a proud member of the LGBTQIA+ community, I am rising to challenge the Premier and Speaker to show solidarity with LGBTQIA+ community by raising the Pride flag over the highest decision-making body in our Province, for the remainder of International Pride Month,” urged De Jager.

He was joined by Miss Drag South Africa, Miz Cambell, at the legislature. While no official announcement has yet been made, it’s understood that a decision was taken to fly the flag at the building.

These symbolic gestures might be small but they help to visibilise the LGBTIQ+ community in a time in which queer people are facing deadly violence across South Africa.