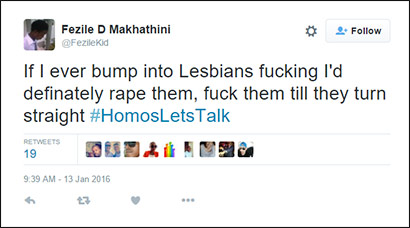 Social media has been horrified by the brazen homophobic hatred of a young Twitter user, who’s promised to rape lesbians and kill gay people.

The furore started when the hashtag #HomosLetsTalk began trending on Twitter, as South Africans spoke out about LGBTI issues.

While homophobic remarks were not uncommon, a series of tweets by Fezile D Makhathini (‏@FezileKid) stood out. He posted: “When I meet gay this year imma shoot them, fuck I hate Iy’tabane #HomosLetsTalk”

He went on to write: “If I ever bump into Lesbians fucking I’d definately rape them, fuck them till they turn straight.”

Makhathini, who is apparently a 17-year-old from Durban in KwaZulu Natal, defiantly dismissed his outraged critics.

“@FezileKid so much ignorance and hatred! Shame, get a life and leave homosexuals alone to live theirs in peace!” commented one person, while another said, “@FezileKid As the mother of a lesbian daughter, I’m deeply offended.”

Makhathini tweeted in response: “Now gays are flooding my mentions cause I hate them. Fuck lemme log off. Fuck this #HomosLetsTalk shit.”

His other comments included, “Fact remains, I hate gays”, and, “Fuck you all I’m 17 and entitled to hate.”

Makhathini’s horrific statements come in the wake of two LGBTI murders in the last month. On 18 December, the mutilated and burnt body of a young lesbian woman Motshidisi Pascalina was discovered in Gauteng’s Evaton North.

On 27 December, 30-year-old Phoebe Titus, a transgender woman, was knifed in the neck in broad daylight allegedly by a 15-year-old in Wolseley in the Western Cape.

The month before, the naked body of LGBTI music student Bobby Motlatla was discovered in his Potchefstroom flat. He had been stabbed 39 times.