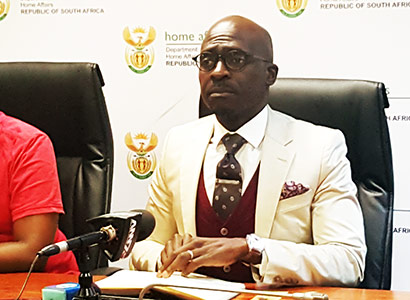 Malusi Gigaba, the Minister of Home Affairs, has admitted that his department has often failed LGBTI South Africans, but says he is finally taking steps to ensure that they are treated as equal citizens.

As we’ve regularly reported over the years, Home Affairs has been slated for some of its officials’ discriminatory refusal to marry same-sex couples, as well as its degrading and harmful treatment of transgender people.

On Tuesday, Gigaba met with representative of the LGBTI community in Pretoria. The historic meeting was followed by a press conference in which Gigaba outlined new efforts to turn things around.

The minister noted that this year is the tenth anniversary of the Civil Union Act that legalised same-sex marriage and said that this was an opportunity “to look back at the challenges in implementing the act to fulfil the rights of the LGBTI community”.

Gigaba said that in the meeting with the LGBTI representatives four main areas of concern were identified. These were the implementation of the Civil Union Act; changing the sex of transgender people in their ID documents; the registration of adoptions by same-sex couples; and the treatment of asylum seekers on the basis of sexual orientation.

The minister said he had set up a task team, consisting of department officials and LGBTI groups, to review legislation, clarify those areas in law that are not clear, and to standardise operations at Home Affairs.

The task team would have 14 days to bring him recommendations on the way forward and a timeline to resolve issues.

Gigaba explained that another intervention will be to focus on sensitisation of Home Affairs officials. This would not only entail strengthening existing sensitisation training but also launching internal sensation campaigns and communications within the department.

“The department needs to do more to raise awareness among officials to fulfil the principle of ‘Diverse People Unite’, the national motto,” he told journalists. “No Home Affairs officials will be exempt,” he said.

Gigaba admitted that same-sex couples are often given differing information at different Home Affairs offices “that limits their right to get married” and said this is unacceptable.

The two year delay in transgender people receiving their updated documentation was also concerning, and was one area that could require legislative change.

The minister promised that, while the challenges are being tackled, he will publish a full list of Home Affairs branches that offer same-sex marriage services, to avoid unnecessary inconvenience and embarrassment.

Gigaba further said that he would conduct an audit of marriage officers that refuse to officiate same-sex couples on the grounds of conscientious objection to ensure that the Civil Union Act is not abused.

When asked if any particular discriminatory incidents had shocked him, Gigaba replied that he had learned that in two cases, one involving a gay couple wanting to marry and another in which two people applied for asylum, Home Affairs officials had demanded “proof” that the applicants were gay. 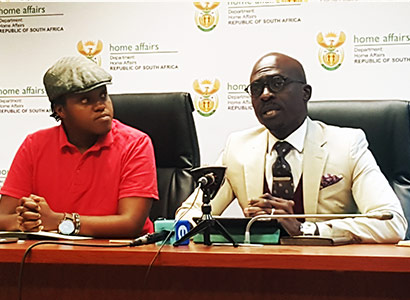 “What kind of proof are you asking for? That shocks. We do not ask heterosexual people for proof that they are heterosexual. That’s a clear, blatant and malicious violation of our laws, our procedures and regulations and the Constitution,” he said.

The minister promised that those officials that conduct themselves in this way would face penalties “so that wrongdoers know that they cannot continue to do it”.

Joshua Sehoole, Regional Human Rights Manager at Iranti-org, said LGBTI groups who attended the meeting were “very happy that the department took this step and invited civil society to engage with them”.

Sehoole praised the minister for “the timelines set and his urgency in dealing with the rights of LGBTI people,” adding that he hopes that “this is something that other government departments and the government as a whole will continue to do, not only nationally, but in the region and globally”.

Gigaba added: “We come into this with open arms. We are willing to engage and be persuaded. We must fully recognise the rights of all South Africans.”