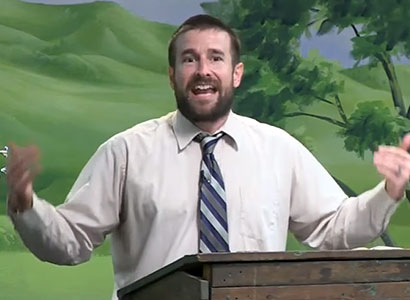 The Premier Hotel OR Tambo has laudably rejected a booking by American pastor Steven L Anderson who believes that gay people should be executed.

Anderson is set to visit Johannesburg in a missionary style excursion to “win souls” for his hateful cause.

Following a campaign to block the trip, the Premier Hotels & Resorts Group have announced that they “have taken the decision to decline a booking by Pastor Steven Anderson at Premier Hotel OR Tambo on the 18th of September 2016.”

Anderson intended to hold a church service at the hotel during which he was to preach.

The company said in a statement: “This decision was taken when it was brought to our attention that some of the contents of his sermons contradict the Bill of Rights contained within the South African constitution. This particularly relates to clause 9.3 which states that ‘No person may unfairly discriminate directly or indirectly against anyone on one or more grounds, including…sexual orientation…’

“As a South African company, we support the democratic values of human dignity, equality and freedom laid out in this cornerstone of our country’s democracy. We reserve the right of admission to any of our properties and will be exercising this right in this instance.”

Anderson also planned to have a breakfast and fellowship at the Spur in Festival Mall and lunch at the Wimpy at the same mall to “prepare for another round of soul-winning”.

Wimpy commented on Monday that while it won’t stop Anderson from coming into the branch it will “not permit any preaching or religious gathering in a Wimpy restaurant”.

On Tuesday, Spur said in a statement to Mambaonline that, “the Spur Group, are reserving our right to prohibit this person entering any Spur restaurants as his views are contrary to the non-discriminatory and openly tolerant stance of our brand”.

Festival Mall, however, has used the Constitution to defend the right of Anderson to enter its premises.

The company said in a statement: “Festival Mall adheres to the requirements of section 15 of the Constitution which states ‘Everyone has the right to freedom of conscience, religion, thought, belief and opinion’.”

It said, however, that it will not “tolerate religious or political movements canvassing people or preaching” at the mall.

“Mr Anderson will be treated fairly like any other patron who will be paying for meals provided. He will not be allowed to conduct fellowship session or win souls, as the two tenants [Wimpy and Spur] are restaurants and not places of fellowship and/or worship.

“In conclusion Festival Mall is not at liberty to contravene section 21 of the Constitution of the RSA which makes a provision for the right of freedom of movement to all humans,” stated the company.

A petition launched by Hendrik Baird, Station Manager at GaySA Radio, calling for the Department of International Relations and Cooperation to refuse to grant Anderson a visa is gaining momentum with over 1,000 signatories.

While Mambaonline believes that Anderson is entitled to his views, he is not entitled to publicly call for the murder of a group of people who already face a daily threat of violence.

We further feel that he should not be allowed to promote his deadly brand of hate in South Africa, and any local organisation, company or government department that facilitates him in this endeavour will be complicit in promoting violence against the LGBT community.

Anderson, who heads up Tempe’s Faithful Word Baptist Church, has stated that killing gay people would free the world from the AIDS epidemic. “…if you executed the homos like God recommends, you wouldn’t have all this AIDS running rampant,” he said in 2014.

Most recently, Anderson praised the slaughter of 49 (at first thought to be 50) people at the Pulse gay nightclub in Orlando. “The good news is that there’s 50 less paedophiles in this world, because, you know, these homosexuals are a bunch of disgusting perverts and paedophiles,” he proclaimed in a YouTube video the day after the massacre.

In a blog post on Monday, Anderson wrote about sending missionaries to other countries: “A missionary needs to be willing to speak out against the false religions in the area and also preach hard on sin.”

He also revealed that his church has “an awesome new missionary to Botswana, Brother Garrett Kirchway,” adding that, “Botswana is one of the more receptive areas in Africa…”

American evangelists campaigning against LGBT equality in Africa have been cited as one of the major drivers of homophobia in a number of countries.

You can sign the petition to keep Anderson out of South African here.