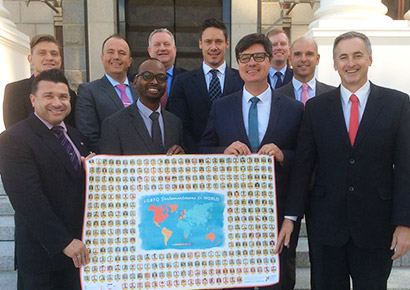 Out and proud LGBTQ MPs

Ten South African lawmakers have stood up for equality by posing for a group photo as openly LGBTQ MPs.

The image, which was taken in Cape Town outside the National Assembly building in Parliament on the 1st of June, includes the following MPs:

The MPs are pictured holding a poster that displays the names and photos of serving LGBTQ parliamentarians around the world, as at the start of 2017.

The image was taken at the request of the LGBTQ Rights and Representation Initiative (also known as Out In Office) at the University of North Carolina. The initiative is an academic programme that tracks LGBTQ parliamentarians.

All of the MPs in the photo are members of the DA. While other parties have some LGBTQ MPs and politicians, (including the ANC’s Lynne Brown, the Minister of Public Enterprises), they have tended to remain in the background when it comes to their sexuality and in addressing LGBTQ issues.

Asked why he believes that the DA is the only party with such visible and outspoken LGBTQ MPs, Mbhele, who is recognised as the first openly gay black MP in Africa, replied: “The DA’s liberal philosophy and principles make the party a more conducive space for LGBT people to feel freer to be out”.

He explained that this is, “because we uphold individual freedom and believe that individuals should define their own identity and not have one forced on them by a group”.

Mbhele continued: “LGBTQ visibility is important in all sectors for at least two reasons: firstly, it is a necessary tool to counter and challenge homophobia because homophobia, in the first instance, always seeks to make LGBTQ people invisible by shaming and stigmatising us.

“Secondly, open and visible LGBTQ figures can be role models for younger LGBTQ people that they can identify with and look up to, which they often lack in our heteronormative world.”

Mbhele added: “No LGBTQ child should have to grow up feeling that their sexuality and being open about it will be an obstacle or hindrance to them achieving career success in any field.”

Mambaonline is not aware of any openly LGBTQ lawmakers elsewhere in Africa.