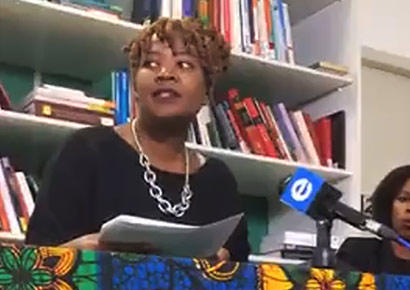 Sibongile Ndashe, Executive Director of the Initiative for Strategic Litigation in Africa (ISLA), spoke out about her recent arrest and detention at a press conference in Johannesburg on Saturday.

Ndashe was among those arrested in a 17 October raid on a hotel during a meeting to discuss a legal challenge to the Tanzanian government’s ban on HIV services for men who have sex with men and other at risk groups.

The police at the time accused the group of “promoting homosexuality” despite this not being a crime. Eventually, the detainees were released on bail and Ndashe and two others were deported to South Africa on Friday night.

During their 10 day ordeal, the detainees were repeatedly denied bail and were not told why they were being held in custody. Nor were they officially charged with any offence.

“We were held hostage at a police station, that’s what happened to us,” said Ndashe. “We were not placed under arrest… it was a hostage negotiation situation.”

According to the lawyer, the South African government attempted to intervene on their behalf but “the Tanzanian authorities consistently failed to provide any information [about the arrests].”

“That application was dismissed because it did not specify an offence,” explained Ndashe. The police “knew that what had happened to us was unlawful and that our detention was illegal,” she said. “From day one the police knew that there was no offence.”

Ndashe described the incident as “an abuse of the law… Someone with power using that power to act outside of the law.”

While she and her colleagues now have their freedom, Ndashe urged the media and the public to continue to speak out about the matter.

“This story is not about us,” she said. The story is about our partners in Tanzania who are still required to go back [to the police] on Monday and report.” Ndashe expressed hope that the investigation against the Tanzanian victims will now also be dropped by the authorities.

“This is a harsh reminder of how states are willing to suppress attempts to hold them accountable,” she said. “The rule of law and right to fair trial were undermined.  The Tanzanian criminal justice system is what has been placed on trial here.”

Earlier this year, the Tanzanian government shut down 40 facilities around the country that offered life-saving HIV services to men who have sex with men.

Health Minister Ummy Mwalimu claimed that the provision of lubricants and condoms at these centres was proof that they were intent on “promoting homosexuality” among young people.

There have also been a surge of arrests of people accused of homosexuality-related charges. Sex acts between men are illegal in Tanzania and carry a maximum penalty of life imprisonment.