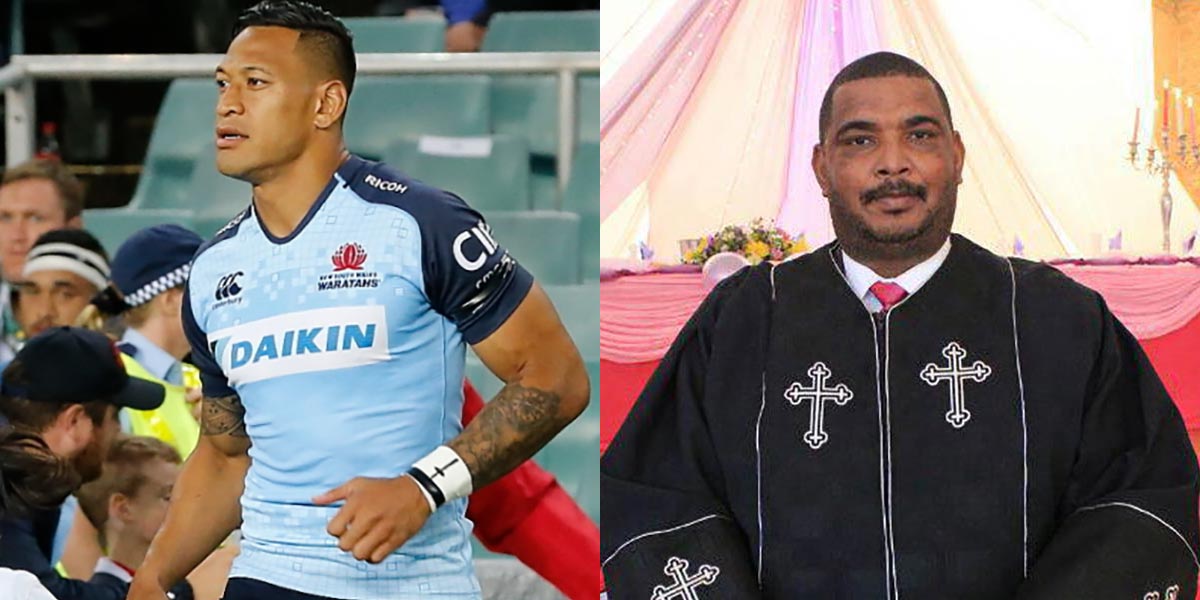 In a 10-minute video of a sermon at his Sydney church, the disgraced rugby player referenced “the events that’s been happening in Australia this past couple of weeks, with all the natural disasters, the bushfires and the droughts.”

Quoting from the Book of Isaiah, the 30-year-old asserted that because people have disobeyed God’s covenant and laws, “a curse consumes the earth; its people must bear their guilt. Therefore earth’s inhabitants are burned up, and very few are left.”

“The events that have happened here in Australia, in the last couple of years – God’s word says for a man and a woman to be together… they’ve come and changed this law,” he said. “Abortion, it’s OK now to murder, kill infants, unborn children.”

Folau continued: “Look how rapid these bushfires these droughts, all these things have come in a short period of time. Do you think it’s a coincidence or not? God is speaking to you guys. Australia you need to repent and take these laws and turn it back to what is right.”

The remarks have outraged people in Australia and around the world. Prime Minister Scott Morrison described them “as appallingly insensitive comments.” Opposition leader Anthony Albanese said they were “pretty reprehensible” and “for people in leadership positions, it’s on us to reject this rubbish. To call it out.”

An ultra-conservative Christian, Folau is suing Rugby Australia after he was fired in May for violating the organisation’s social media policy and values, thanks to a series of homophobic posts.

He’s now found an ally in Cape Town’s Oscar Bougardt, who is facing 30 days in jail for violating a May 2018 court order to stop spouting hate speech against the LGBTQ community.

Taking to Facebook on Monday, Bougardt said: “I agree with Israel Folau.” He insisted that “The bible is clear homosexuality is an abomination to God, and if we kill babies through abortions we are killers. Governments does not want to know that they disobey God through legalizing abortions and same-sex union, and for this reason God strikes them with natural disasters.” He added: “We cannot live sinful lifestyle, and expect the gift of eternal life.”

In January last year, Bougardt also proclaimed that gays and lesbians were to blame for natural disasters in Cape Town. He said the drought conditions in the city were caused by God in judgment against the “perversion” of homosexuality. “Blame ‘drought’ on wickedness and homosexuality and church leaders who fail to preach the Bible and sodomite abomination,” he said.

The preacher was recently served with papers demanding that he explain why he should not be jailed for his hate speech.