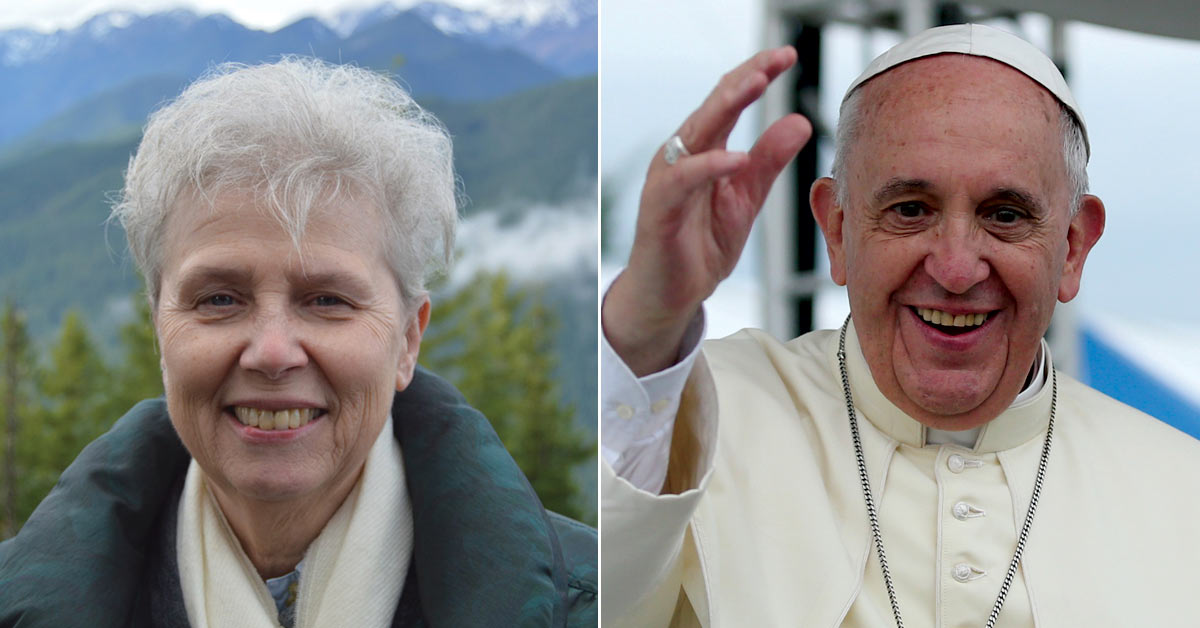 A nun who co-founded an LGBTQ Catholic ministry in defiance of the church has been congratulated for her decades-long queer-affirming work by Pope Francis.

The pontiff praised Sister Jeannine Gramick in a hand-written note in December to mark the 50th anniversary of her efforts in promoting LGBTQ acceptance in the Catholic Church.

Gramick, together with Father Robert Nugent, founded New Ways Ministry in 1977. The organisation “educates and advocates for justice and equality for LGBTQ Catholics, and reconciliation within the larger church and civil communities.”

Throughout her half-century of campaigning for LGBTQ equality, the nun often found herself at odds with the church.

In 1999, Gramick and Nugent, who passed away in 2013, were banned from speaking or writing about homosexuality and ordered to leave New Ways Ministry and stop their LGBTQ pastoral work.

The two were accused of failing to present “the intrinsic evil of homosexual acts and the objective disorder of the homosexual inclination.”

Gramick defied the Vatican and refused to obey the instructions, stating that she would not “collaborate in my own oppression by restricting a basic human right.” She was forced to leave her order, the School Sisters of Notre Dame, and joined another, the Sisters of Loreto, to continue her work.

Things began to change after Francis became pope in 2013. Two years later, members of New Ways Ministry who pilgrimaged to the Vatican, including Gramick, were surprised when they were granted VIP seating at a papal audience in St. Peter’s Square.

In his December letter, Pope Francis acknowledged Gramick’s “50 years of ministry, which were 50 years with this ‘style of God,’ 50 years of closeness, of compassion and of tenderness.”

He said that “You have not been afraid of ‘closeness,’ and in getting close you did it ‘suffering with’ [compassion] and without condemning anyone, but with the ‘tenderness’ of a sister and a mother.”

Francis concluded: “Thank you, Sister Jeannine, for all your closeness, compassion and tenderness. I pray for you. Please do not forget to pray for me. May Jesus bless you and the Holy Virgin protect you.”

It also recently came to light that Francis sent at least two letters to New Ways Ministry earlier in 2021, acknowledging that its “history has not been an easy one.” He thanked the organisation for its “neighbourly work” and said of Gramick: “I know how much she has suffered. She is a valiant woman who makes her decisions in prayer.”

In an interview with America, Gramick said: “Sometimes we have to go against what the leaders of our church say. We have to operate out of love and not fear.”

She said that her hope for LGBTQ Catholics is that “they all feel welcome and comfortable in any parish in the world. That they might feel just as much a part of the church as anyone else.”

Pope Francis, who is known to be more progressive than his predecessors, has walked a fine line in expressing his views on LGBTQ people.

He has said that gays and lesbians should not be judged or discriminated against and met with the parents of LGBTQ children, telling them that their children are worthy of love from the church. In 2020, he expressed his approval of the legal recognition of same-sex unions by the state (but not the church).

Francis, however, remains opposed to the recognition of same-sex marriage. He’s also rejected transgender rights and gender diversity, describing these in public statements as threats to the family and humanity.