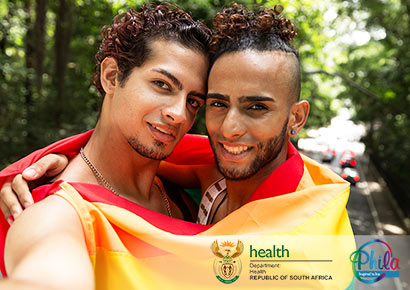 LGBTQ (lesbian, gay, bisexual, transgender or queer/questioning) people and men who have sex with men often face stigma and discrimination in everyday life.

When we get discriminated against we often blindly accept this behaviour, and even more often, don’t even know that we have the right to speak out and defend ourselves. Many of us don’t even know our rights!

Here are some facts about where we stand as a community and as individuals:

1. Should I feel ashamed or embarrassed for being LGBTQ or for loving someone of the same sex?

No! Sadly, many do feel uncomfortable, ashamed or embarrassed about belonging to the LGBTQ community, but we shouldn’t. We feel this way because we’ve grown up in a society that makes us feel unwelcome or “wrong”. The truth is, there is no reason at all to feel ashamed or bad about being LGBTQ or to love someone of the same sex.

2. Is being gay or having a relationship with someone of the same sex unnatural or un-Godly?

Everyone is entitled to their beliefs, but no one has the right to impose these on you. Respected psychologists, psychiatrists and health organisations around the world agree that same-sex love is just another variation of normal human sexuality and not an illness or condition. There are also many religious organisations that embrace LGBTQ people. And same-sex attraction in nature is not uncommon at all and has been well documented among other species.

3. Can my sexuality be “fixed” through prayer or therapy?

The World Psychiatric Association, the Psychological Society of South Africa and many other mental health bodies agree that trying to “cure” LGBTQ people of same-sex attraction (known as gay conversion therapy) doesn’t work and is dangerous and unethical. In fact, trying to change a person’s sexual orientation has been linked to causing issues such as depression, and low self-esteem. Several governments (like Britain) are banning these practices as part of their contributions to improve the lives of LGBTQ people. Counsellors and religious leaders should help LGBTQ people accept who they are rather than trying to change them.

No. Coming out as LGBTQ or as having same-sex attraction is always your choice, and there is no set age or time to do it – if you do it at all. While most experts agree that it’s generally better if you are able to be open and honest about yourself to others, it’s your call to make. It also depends on your context and you should always consider whether it is safe to come out to your family or community. The value of coming out is that you may be able to live more authentically as the person you are – but it is not a requirement.

5. Can I be fired from my job because I am LGBTQ or in a same-sex relationship?

No. In South Africa it is illegal to fire, harass or discriminate against anyone in the workplace because of their sexual orientation or gender identity. You are protected by the Employment Equity Act, 1998 and the Rental Housing Act, 1999 that specifically forbid discrimination in employment and housing. If you are unfairly treated, and your employers are unable to resolve your complaint, contact the Commission for Conciliation, Mediation and Arbitration (CCMA) within six months of the event for assistance.

6. Do I have the right to get married to my same-sex partner?

You certainly do! South Africa was the first country in Africa to offer marriage quality to same-sex couples. You can marry under the Civil Union Act and can register your partnership as either a Civil Union or a marriage (it’s your choice). You can be married by a private marriage officer or you can marry at the Department of Home Affairs. Sadly, the service is not offered at all Home Affairs offices because some officials refuse to do so. This is being addressed with the department and you should not accept being turned away. Home Affairs must provide you with an alternative official to marry you.

7. Am I allowed to adopt children with my same-sex partner?

Yes, since 2002, same-sex couples have been allowed to adopt children jointly in South Africa. No adoption agency can treat you and your partner any differently from opposite-sex couples. If you adopt as a single parent, your sexuality or gender identity must not play any role in deciding whether or not to allow you to adopt.

8. Are people allowed to call me insulting or offensive anti-LGBTQ names? Can they verbally abuse me because of who I am?

No. Under the Equality Act, this would be seen as hate speech, regardless if it is said in person, in writing, in a recording or on social media. It also doesn’t matter if it was aimed at you directly the LGBTQ community in general. You can lodge a complaint with the SA Human Rights Commission or the Equality Courts if you have been the victim of hate speech.

9. Can I be turned away, mocked or humiliated by a nurse, doctor or health-care worker because of my sexuality or gender identity?

No. Health-care professionals must treat you with the same respect and care as any other patient or client and they must provide you with competent and equal services. They are also not allowed to condemn or mock you or your sex life and are not allowed to discuss this with anyone else.

Yes, you are – as long as you have only had sex with no more than one sexual partner in the past six months (or have not had sex at all for six months). This policy applies to everyone, regardless of their sexuality or gender.

Every relationship is different and there are no rules about anyone’s roles, other than what you choose together. Some couples may have a more effeminate partner and a more masculine partner, some may have equally masculine or equally effeminate partners. There is no “right” or “correct” way. The idea that there MUST always be a traditionally male or female role in relationships is an outdated heteronormative idea. Do what works for you.

12. Do I have to answer questions from straight people about my sexuality or gender identity?

LGBTQ people and men who have sex with men are often asked intrusive and offensive questions about our sex lives, including what we do in bed and how we do it. We do not have to answer these questions unless we want to. We have the right to privacy, just like everyone else.

13. How can I protect my health as a man who has sex with men?