In a new low, Cape Town hate preacher Oscar Bougardt has suggested that slain queer dancer Kirvan Fortuin was somehow responsible for their own murder and that their alleged killer could be “the real victim.”

On 15 June, Bougardt shared an article on social media about Fortuin’s deadly stabbing two days earlier, allegedly at the hands of a 14-year-old girl.

It’s believed that Fortuin, 28, was socialising at a friend’s house in Macassar, near Cape Town, and reportedly had an argument with the girl who was visiting the neighbours from out of town. She allegedly stabbed Fortuin twice in the chest.

MambaOnline has been told that the girl allegedly made homophobic comments to Fortuin, who was an award-winning and internationally recognised dancer, before and after the stabbing.

“I need to know, what is a 28 man doing with a 14 year old girl early morning even late at night?” asked Bougardt on Facebook in an unconscionable post.

He continued: “I see some media houses is trying to make this a hate crime. He was allegedly in an argument with the same girl a week earlier, because the girl passed some anti homosexual remarks. Something very sinister about this killing. People pointing fingers at a 14 year old. My question again, why was a 14 year old girl with 28 year homosexual man early morning? I won’t be surprised if young girl was the real victim year [sic].”

When he was challenged about his views, Bougard responded: “I won’t be surprised if he abused [the] young girl.” He continued: “I want people to look pass the fact that he was a homo, I need someone to tell me what he was doing with 14 year old. Homosexuality is no excuse, if he abuse the girl he deserved what he got.”

The pastor’s unhinged, callous and homophobic comments and speculation are a slap in the face to Fortuin’s grieving family and friends and reflect an obsessive hatred towards LGBTQ people. 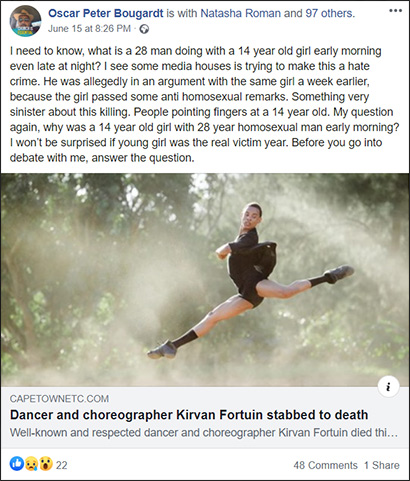 In October 2019, Bougardt was served with court papers for violating the terms of his homophobic hate speech conviction. He was found guilty of hate speech by the Western Cape High Court in May 2018 and was given a 30-day jail sentence, suspended for five years.

This followed years of abuse on social media and in the press against LGBTQ people, including calling for their execution and imprisonment and stating that they are paedophiles targeting young children.

The cleric has not been deterred by the judgement and has continued to make anti-LGBTQ comments. He’s also remained a proud associate of American hate preacher Steven Anderson, who has has been banned from entering over 30 countries, including South Africa, because of his extremist hate speech.

A date has still not been set by the courts to hear the case addressing Bougardt’s alleged violation of his homophobic hate speech conviction.

Fortuin’s funeral will take place on Sunday 21 June 2020 at 9h00 at the PPK Church in Macassar and will be streamed on Facebook here.